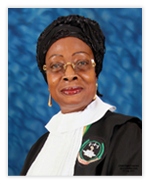 Justice Sophia A. B. Akuffo – Ghana

Justice Sophia A. B. Akuffo (Ghana) was elected President of the African Court on Human and Peoples’ Rights on 18 September 2012 for a two-year term.

Her publications include: The Application of Information & Communication Technology in the Judicial Process – The Ghanaian Experience, presented to the African Judicial Network, Ghana (2002).