The African Court in Brief

The African Court on Human and Peoples’ Rights is the judicial arm of the African Union and one of the three regional human rights courts together with the European Court of Human Rights and the Inter-American Court of Human rights. It was  established to protect the human and peoples’ rights in Africa principally through delivery of judgments. The Court has its permanent seat in Arusha, the United Republic of Tanzania.

Establishment of the Court

The Court applies the provisions of the African Charter on Human and Peoples’ Rights and other human rights instruments ratified by the States concerned. It does not have criminal jurisdiction like the International Criminal Court.

The Mission of the Court is to enhance the protective mandate of the African Commission on Human and Peoples’ Rights by strengthening the human rights protection system in Africa and ensuring respect for and compliance with the African Charter on Human and Peoples’ Rights, as well as other international human rights instruments, through judicial decisions.

The vision of the Court is an Africa with a viable human rights culture.

The Court bases its core values on the African Charter and other internationally recognized principles of human rights and the promotion of the rule of law. The Court continues to foster and uphold the following core values:

The Court’s Strategic Objectives emanate from the mandate of the Court and include the following: 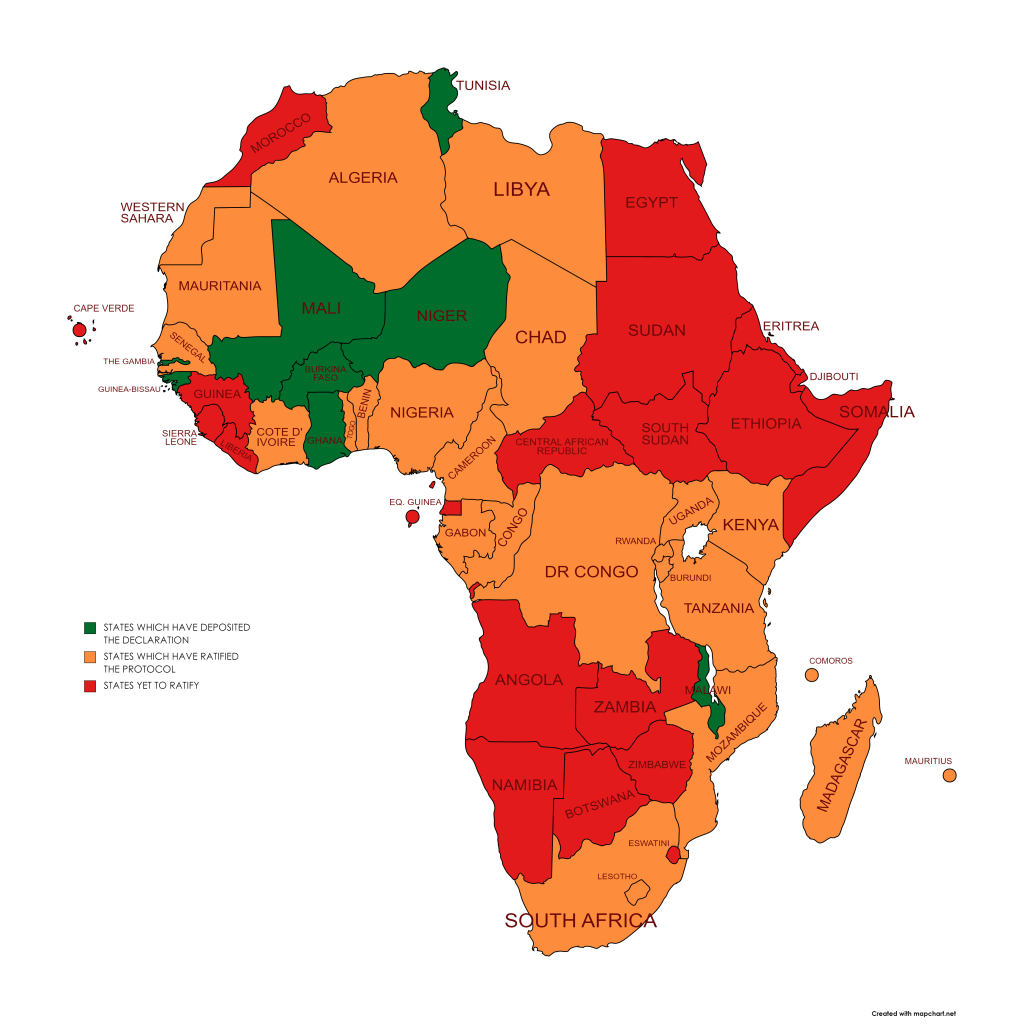 54 of the 55 Member States of the African Union (AU) have  ratified or acceded to the African Charter on Human and Peoples Rights with the exception of Morocco and have therefore committed themselves to respecting the principles set out therein.

Only 33 Member States have currently ratified the Protocol establishing the African Court. Out of these, only  eight (8) States  have accepted the competence of the Court according to its Art. 34 (6), according to which individuals and NGOs can directly file cases to the African Court.
In the absence of such a Declaration, the application must be submitted to the Banjul Commission first, which may then – after preliminary examination – decide to refer the case to the Court.

The following 33 states have ratified the Protocol, the  ones in green have also deposited the Special Declaration:

The Court  holds Ordinary Sessions, four times in a year, lasting for four weeks  usually in March, May, September and November, and  hold Extra-Ordinary Sessions if necessary. The sittings normally take place at the seat of the Court; however, the Court may decide to sit in the territory of any other Member State of the African Union