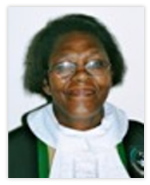 Justice Kelello Justina Mafoso-Guni is from the Kingdom of Lesotho. She completed her studies of law at the Universities of Lesotho and Edinburgh, before becoming Crown Counsel in her home country.

She then moved to live and work in the United Kingdom, where she was a member of the civil service for 12 years. On her return to Africa, she served as a magistrate in Zimbabwe for a further 12 years, becoming the first woman to be appointed to the Bench.

Returning to Lesotho, Justice Kelello took up a position at the High Court Bench, another post to which she was the first female appointee. She was elected a Judge of the court in 2006 for a four year term.