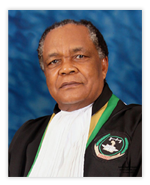 Justice Bernard Makgabo Ngoepe, a national of South Africa, is among the inaugural Judges of the African Court. He was first elected as a Judge in 2006 for a two-year term and re-elected in 2008 for a six-year term. On 17 September 2013, he was elected Vice President of the Court.

Justice Bernard Makgabo Ngoepe holds graduate (B.Juris) and post-graduate (LLB) law degrees. He practised law for more than 20 years in various fields, including that of human rights before his appointment as a Judge of the High Court in South Africa in 1995, and Judge President of the same Court in 1999. Justice Ngoepe has also acted as Justice of both the Supreme Court of Appeal and the Constitutional Court of South Africa.

Justice Ngoepe has received several awards in recognition of his contribution in the field of human rights, including three honorary Doctor of Laws (LLD). He was also appointed honorary Professor of Law and a post-graduate scholarship has been launched in his name. The society of advocates has also launched and named an award in his name.

Justice Bernard Makgabo Ngoepe is the Chancellor of the University of South Africa since 2000.