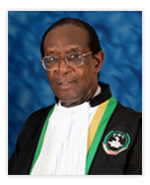 Justices Jean Mutsinzi is a national of Rwanda. He was elected Judge of the African Court in 2006 for a six-year term (renewable). He served as President of the Court for a term of two years from September 2008 to September 2010.

Justice Jean Mutsinzi also assumed high ranking duties at the African level. He worked at the Organization of African Unity (OAU) as the Head of the Legal Research Section (1982-1984). From 1984 to 1987, he was in charge of the Office of the Chief Legal Adviser. During Mutsinzi’s tenure as OAU Chief Legal Adviser, the Office played a significant role in bringing OAU Member States to sign and ratify the African Charter on Human and Peoples’ Rights as well as in the establishment of the African Commission on Human and Peoples’ Rights.

Between 1985 and 1989, Judge Mutsinzi was in charge of Staff Administration at the OAU Headquarters. From 1989 to 1994 he served as the Chief Executive of the African Commission on Human and Peoples’ Rights in Banjul, Gambia. As the Chief Executive of the Commission, he, set up its structures, sought financial support for its programmes on Human Rights promotion and protection.
During that period he also had the rank of Head of Diplomatic Mission. From July to December 1994 he was the OAU Representative at the United Nations Mission for the Referendum in the Western SAHARA (MINURSO). Judge Mutsinzi was also in charge of the Legal Office at OAU from 1994 to 1995.
Outside the OAU, Justice Jean Mutsinzi served as a Judge of the COMESA Court of Justice (Common Market for Eastern and Southern Africa, 2001 – 2003). He was also a Barrister-at-Law at the Court of Appeal of Lubumbashi and the Supreme Court from 1967 and served as the President of the Bar Association of the same Court (1978-1982).

Justice Jean Mutsinzi was also a lecturer in various universities. He was in charge of the Research Section in the Institute of European Studies of the Free University of Brussels from 1965 to 1966. Between 1966 and 1973, he taught Public and Private International Law, Maritime and Air Law, Constitutional and Administrative Law, etc. in the National University of Zaire. He has also been teaching Law at the Kigali Independent University.