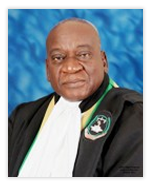 Justice Modibo Tounty Guindo is from Mali. He was elected in 2006 for a term of six years. He served as the Court’s first Vice-President from September 2006 to September 2008.

He has previously worked as technical consultant at the Ministry of Justice, Mali, and served as a Judge at the Court of First Instance in Timbuktu, Mali.

Judge Modibo is a trained Judge, a graduate of the National School of Administration. Where he graduated with a Certificate in Magistracy.

In the administration of the Judiciary, he was Advisor in the Ministry of Justice in charge of human rights; to that end, he presented the second Periodic Report of Mali on the implementation of the International Covenant on Civil and Political Liberties before the Human Rights Committee in Geneva, he was a panellist in the United Nations inter-Agency Workshop on the human rights-based approach which started in 2002 in Stanford, the USA, he was an Expert at the Conference of governmental bodies in charge of human rights in Francophone countries, which held in Brazzaville from 25 – 28 April 2003; he proofreadthe draft document establishing the National Human Rights Commission, he was UNFPA Consultant for the realization of the Hurist Programme in collaboration with the OHCHR in Mali, in April 2003 for the implementation of the Project to strengthen human rights and support democratic institutions.