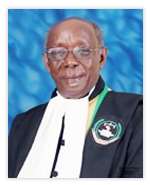 Justice Joseph Nyamihana Mulenga S.C., a Uganda national, was elected a Judge of the African Court in 2008 for a term of six years. Justice Joseph Mulenga graduated from London University with a Bachelor of Laws (LL.B) in 1965. The following year he became a Barrister-at-Law of the Royal Society of the Middle Temple of London, United Kingdom.

Prior to joining the African Court, Justice Mulenga served in the East African Court of Justice (2001-2008), initially as Vice-President and finally as President of the East African Court. Before joining the regional courts, Justice Mulenga served in the national judiciary in Uganda. He first worked as a Public Prosecutor in the Department of Public Prosecutions in Uganda, rising through the ranks from Pupil State Attorney to Senior State Attorney. He also served as a Cabinet Minister, first as Minister of Justice and Attorney General, and then, briefly, as Minister of Regional Co-operation (1986-1989). From 1997 to 2009, he was appointed a Justice of the Supreme Court of Uganda (1997-2009).

Prior to the judicial appointments, Justice Mulenga practiced law at the Uganda Bar (1967 -1997). He was also well known as a private practitioner of Law and consultant for his private firm, Kampala Associated Advocates. In addition to the legal practice, Justice Mulenga participated in Ugandan politics and was once a member of parliament.