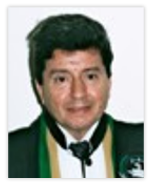 Justice Hamdi Faraj Fanoush is from Libya, where he is a respected judge of long standing. As well as being a member of Libya’s Superior Council of Judiciary, he is currently Chief Justice (President) of the Court of Appeal in Tripoli. He was elected in 2006 for a four year term.

Judge Fanoush is a regular lecturer and trainer on human rights issues for the Libyan judiciary, and is generally dedicated to promoting human rights in his country.

Between 1984 and 1997, Judge Fanoush also served as Libya’s ambassador to Cameroon.