NEWS
13:43
Home Flash News OPENING SPEECH OF HON. LADY JUSTICE IMANI D. ABOUD, PRESIDENT OF THE AFRICAN COURT ON THE OCCASION OF THE 67TH ORDINARY SESSION OF THE COURT 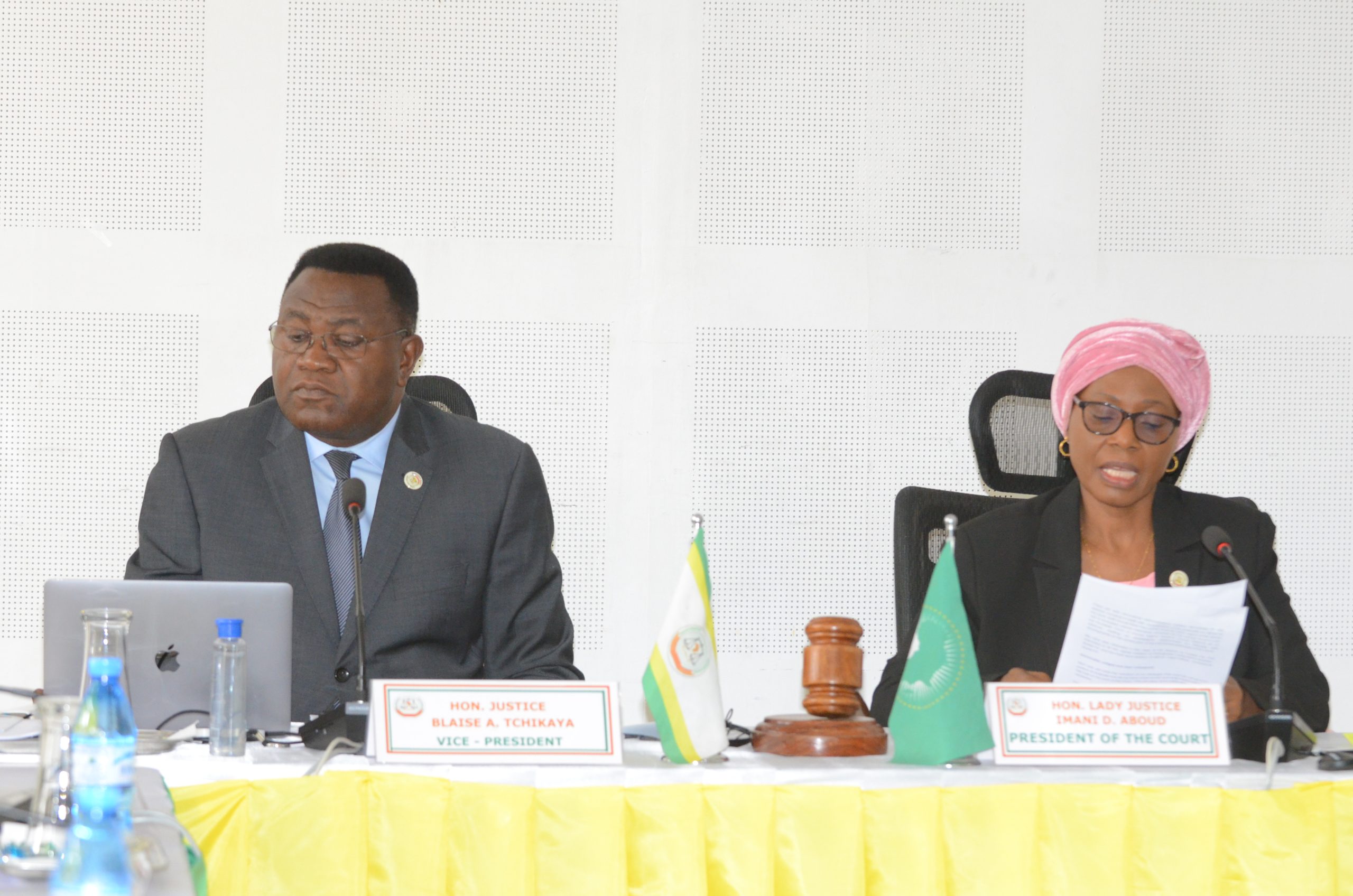 I would like to welcome you all to the seat of our Court for the 67th Ordinary Session of the Court. As you all know, during the 66th Ordinary Session we finalised recruitment for the positions of Deputy Registrar and Head of Finance and Administration. On behalf of all my colleagues, staff members of the Registry and my personal behalf, I wish to officially and once again say congratulations to the newly appointed Deputy Registrar, Ms. Grace Wakio Kakai, who took up her duties on 1 October 2022. In keeping with the spirit of the AU Staff Regulations and Rules, and in conformity with Rules 19(2) of the Rules of Court, “Upon assumption of office, the Deputy Registrar shall take a similar oath or make a similar declaration before the Court” Since this is the first Session of the Court after her appointment, immediately after my opening statement, we will witness a solemn ceremony to swear-in Ms Grace Kakai as the Deputy Registrar of our Court.

We are back to Arusha, for yet another ordinary session of our Court. Our quarterly meetings have become a ritual which we have decided to honour as we took the oath of office to serve the continent. But as I said at the last court session, we must ask ourselves what our contributions have been in the discharge of the mandate of the Court – what has been the impact of our activities for the past 16 years? How do the people we were elected to serve see us? How many decisions do we render each session? etc. These are some of the questions that must exercise our minds each time we meet.

It is precisely because these burning questions continue to prick our minds each day that we decided that we should have a ‘facilitated retreat’ with our sister organ, the African Commission on Human and Peoples’ Rights. Those who took part in the 3-day consultation will agree with me that it was a worthwhile meeting. We were able, for the first time, meet with prominent human rights advocates and experts who have and continue to work closely with the two bodies. But more importantly, we were able to talk frankly.

We may not have gotten a clear commitment on major issues, but we did agree to adopt a roadmap that will guide our relationship going forward. As you all know, we are committed to the letter and spirit of complementarity and I was glad that even those colleagues who could not be there physically, found time to join us virtually. We have scheduled the Complementarity Roadmap for consideration and formal adoption at this session, so we can start implementation from our side.

Prior to the Retreat with the Commission, I led a delegation for a sensitization visit to Ethiopia, in a bid to have the latter ratify the Protocol and deposit the Declaration. We did not come back to Arusha with a ratification, but I can assure you that it is loading. We had very fruitful and promising discussions with key stakeholders who were very hopeful the country will ratify sooner rather than later. The highlight of our visit was the signing of an MOU with the Supreme Court of Ethiopia, the first such MOU with a national judiciary.

During the intersession, I also undertook a number of outreach and networking activities with relevant partners and stakeholders, including participating in the 2nd Annual East African Court of Justice Judicial Conference held in Kampala Uganda from 26 to 28 October 2022. I also deliver a speech at the opening ceremony of the 73rd Ordinary Session of the African Commission on Human and Peoples’ Rights and the commemoration of the 35th Anniversary of the operationalization of the Commission.

As you all know, immediately after the last session, we had a very fruitful peer to peer visit to the European Courts, where we visited the International Criminal Court, the International Court of Justice and the European Court of Human Rights. At this visit, we shared experience of our works, discussed ways of collaboration, cooperation and synergy and how our courts should strengthen relationship. The African Court is the youngest of the three Court and has benefitted immensely from the rich experiences of the three sister Courts from the European systems. I believe we have also shared with them valuable experiences from the African perspectives.

Apart from the above said, as we are approaching the end of the year and this being the last session of our court, allow me to give you a brief report of what we have achieved together during this year. At the beginning of this year, we began by institutionalizing the ‘opening of the Judicial Year of the Court’, with a keynote address from the Vice President of the Federal Republic of Nigeria. We should decide, at this session on the speaker or speakers, as well as the nature of next year’s event, we undertook 4 sensitization visits to Comoros, Zambia, Mauritania and Ethiopia, which we hope will either result in the ratification of the Protocol and/or deposit of the Declaration; we were also able to bring, to the attention of the highest personality of Tanzania, that is, Her Excellency Samia Suluhu Hassan – President of the United Republic, the work of the Court and the challenges the Court was facing. From that courtesy visit of 10 September 2022, we got some assurances, including the likelihood of Tanzania redepositing the Declaration, and the construction of the permanent premises of the Court.

We engaged in an intensive judicial diplomacy with Member States, Permanent Representative Committee, Ambassadors and other stakeholders at the AUC on a wide range of issues relating to the work of the Court as a whole and the welfare of Judges in particular. This diplomacy enabled us to restore the benefits and contract of Judges to the Pre-Niamey position.

The Tripartite Judicial Dialogue between the ECOWAS Court, East African Court of Justice and the African Court was a huge achievement in this year. During this dialogue we had ample time to discuss and deliberate on how we can work together in the promotion and protection of human rights.

We had a very fruitful Consultative meeting with the OHCHR, bringing together the three AU Human Rights organs with a human rights mandate. At this meeting, we discussed ways of collaboration, cooperation and synergy; and we finally signed the Staff Exchange Programme between the Court, Commission and Committee, to facilitate the exchange of staff between the three organs.

Notwithstanding the above achievements, our Court still faces its traditional challenges of low ratification, few deposits of the declaration and non-compliance with our decisions, which I consider to be extraneous to us. On internal challenges on how to strengthen the Registry, especially the language and legal units to ensure expeditious and high standard preparation of our working documents. The Registry is working hard on it and there are some improvements and a better coordination between these two very important units. When the draft documents are of very high quality this reduces the time spend in deliberations.

In this session, we have scheduled to deliver 11 decisions that we had targeted. We have dropped from what we did in our last session where we managed to deliver 17 decisions. We have to re think about this and make sure that we are utilising all the mechanisms at our disposal, and in accordance with the Protocol and Rules of Court, to ensure that we deliver justice as effectively and expeditiously as we possibly can. I am hoping therefore that we should be able to render more decisions during the next session.

Other Judicial Matters which will be delt during this session includes; a roadmap on Complementarity between the African Court and the African Commission, meeting of Committee on the Review of the Rules to Consider Draft Revised Practice Directions, Draft Revised Internal Judicial Practice, Report on Compliance with decisions of the Court.

There are also non-judicial (administrative) matters earmarked for this session, includes; health talk, consideration of the proposals on reform of the court, draft Annual Work Plan of the Court 2023, report of the court’s visit to the European Court of Human Rights, the International Criminal Court and the International Court of Justice, proposal for the African Court to join the European Court of Human Right’s Superior Courts Network as an observer, briefing on Sensitisation mission/visit to Ethiopia and developments on the construction of the permanent premises of the Court.

We have also dedicated days of the session to finalise the Oral Interviews to fill the regular post of Portuguese Interpreter/Translator, Grade P4 and fixed term post of Senior Legal Officer- Compliance Grade P3. Also, some Committees will have the opportunity to meet.

As the year has now come to an end, I would like to congratulate all of us for work well done; and to thank the registry and officers who are the work force behind the successful performance of the Judges. I wish you a fruitful preparation of the court’s staff retreat.

It is my honour and privilege to humbly declare the 67th ordinary session of the African Court on Human and Peoples’ Rights officially open and I wish all of us fruitful deliberations.