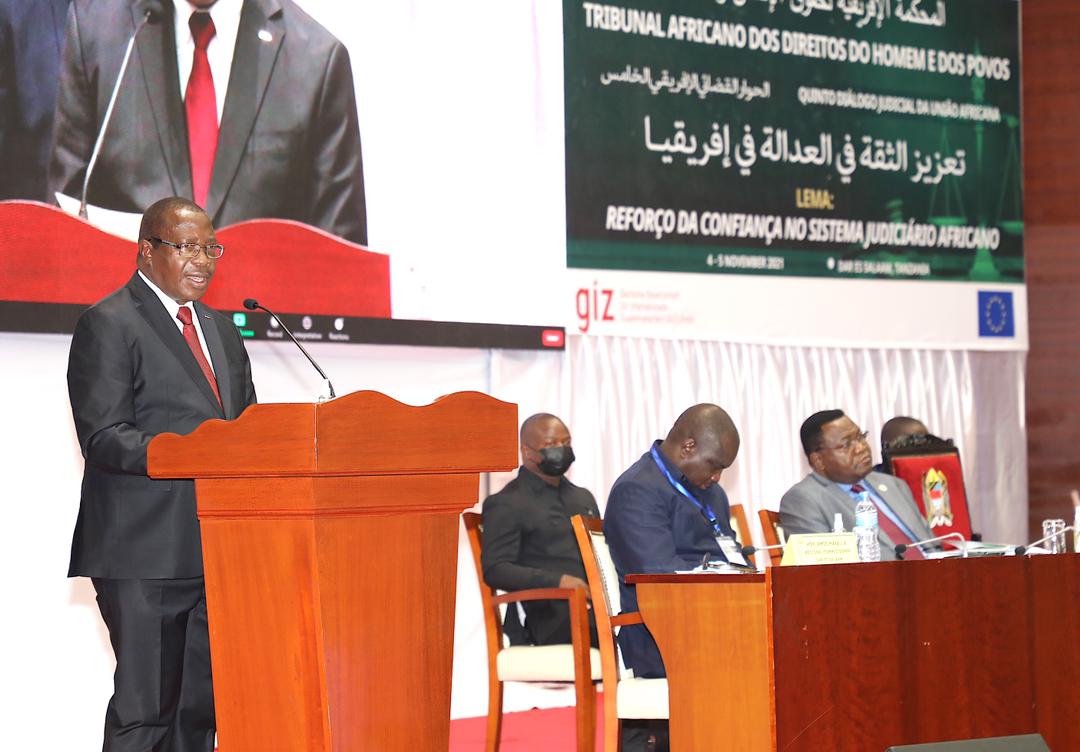 The two-day biennial Dialogue was officially opened by the Vice President of the United Republic of Tanzania, H.E. Dr Phillip Mpango with a call on African Union Member States to work together to build the confidence of their citizens in regional courts.

“The choice of the theme for this Dialogue is in itself an admission of the limited trust and confidence that our people have in the African judicial system. Therefore, in order to earn their trust, you have to work hard to find a cure for the strongest factors and concerns that diminish trust in the Africa judiciary”, he said

He cited some of the unpleasant and shocking experiences with the courts with cases left pending for years, unbearable cost of litigation, court summons and judgments written in foreign languages, cumbersome court procedures and discrimination against women, children and the poor.

“Some people lose cases due to lack of legal know-how. Victims of such malpractices will have little trust in the judiciary”, said H.E. Dr Mpango.

H.E. Dr Mpango said the independence and impartiality of the judiciary are paramount and challenged participants of the Judicial Dialogue to draw from their own experiences in the judiciary and deliberate on obstacles to building public trust without jeopardizing the processes of delivering justice.

Specific focus should be on tackling bottlenecks such as corruption which fosters criminality, harnessing the use of ICT in judicial service delivery to increase transparency and that the Court sets realistic standards in considering these obstacles as some of the ways to retain the confidence of the African people and also come up with solid and actionable recommendations.

He thanked the African Union for the decision to have the seat of the Court in Tanzania and pledged continued cooperation of the Tanzania government.

In her welcome remarks, the President of the African Court, Hon. Lady Justice Imani Aboud thanked the government of the Republic of Tanzania for the continued support afforded to the Court as its host.

She observed that the discussion on judicial independence is important because it is so intimately connected to social behaviour that it cannot possibly be assessed and debated away from non-legal parameters such as sociology, psychology, idiosyncrasy and even religion.

“While these parameters belong more to the personal and individual sphere, one should not lose sight of the fact, even acting under the guise of the institutional body of a bench, courts of law are only the result of merged individual and personal agents influenced by the same parameters, she underlined.

The mandate of the Court is to complement and reinforce the functions of the African Commission, which is a quasi-judicial body charged with monitoring the implementation of the Charter.

AFRICAN COURT ON HUMAN AND PEOPLES’ RIGHTS TO DELIVER 14 JUDGMENTS ON THURSDAY, 2 DECEMBER 2021