NEWS
04:44
Home Flash News SPEECH BY GUEST OF HONOUR, HE DR. HUSSEIN ALI MWINYI, THE PRESIDENT OF THE REVOLUTIONARY GOVERNMENT OF ZANZIBAR, DURING THE OPENING OF THE JUDICIAL DIALOGUE BETWEEN REGIONAL AND SUB-REGIONAL COURTS IN ZANZIBAR 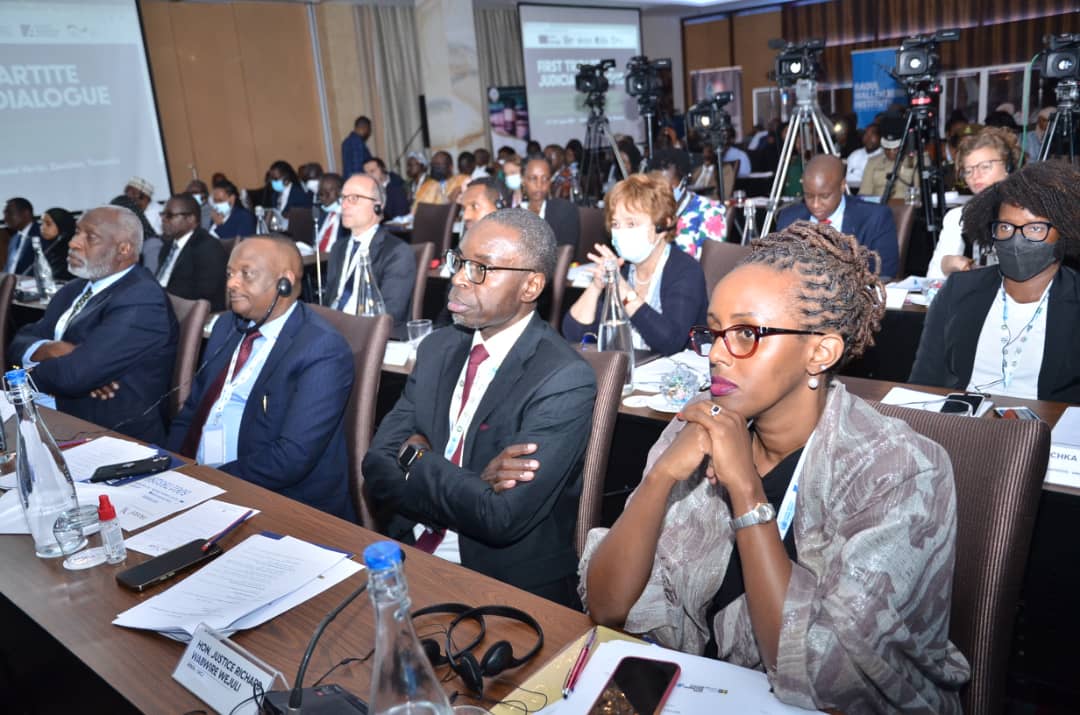 Your Excellency the President of the ECOWAS Court of Justice

Your Excellency the President of the East African Court of Justice

Hon. Registrars of the three Courts

I find it fit to begin my remarks by saying how honoured Zanzibar, its Government, and its people are for hosting another international meeting, gathering members of the highest judicial institutions in Africa and other distinguished stakeholders of the rule of law, and justice. I would like to personally express my appreciations to the Presidents of the African Court on Human and Peoples’ Rights for inviting me to address this august gathering.

As is mentioned in my invitation to this forum, Honorable Judges and Legal Officers of the ECOWAS, East African and African Courts gather for the next three days to conduct a judicial dialogue on various issues pertaining to regional human rights justice in Africa. Dialogue is traditionally known to be a vector of understanding, but foremost a means of exchange on issues of joint interest.

I am aware that, the main objective of the Judicial Dialogue that begins today is to enhance the promotion and protection of human and peoples’ rights on the continent through effective collaboration between continental and regional judicial institutions. The Dialogue also aims, as features in the programme, at encouraging exchange on judicial issues as well as on best practices and to propose responses to the common challenges faced by the three courts in the protection of human rights. The ultimate purpose, as I understand, is to consolidate cooperation between these Courts and between legal officers in a manner that reinforces regional human rights justice as designed and projected by the African Union, the East African Community and the Economic Community of West African States.

With these objectives in mind, it pleases me to suggest that you are guided in your discussions by three parameters around which the public and lay persons would place trust in your office as judges and courts. Firstly, judicial dialogue such as the one you will be undertaking in the next three days should be guided by independence. Let me share the sentiment and expectation of ordinary citizens about the manner in which judges and courts should discharge their office. The most relevant maxim in this respect is that “justice must be done but it must also be seen to be done”. Given that they are not privy to the internal functioning of courts, members of the public are only left with their perception about how justice is rendered, that is what they see as the outcome of justice, I mean decisions of courts. Judicial dialogue will therefore gain relevance if it helps reinforce the capacity of your courts to deliver decisions that are of the best quality as inspired by the facts of the case, applicable law, tight and contextualised reasoning and effective social purpose. Of course, litigation is such that one party is set to lose and the other party to win, although justice could also present a win-win situation depending on the circumstances of the case. Most often the unsuccessful party will complain but administering justice under the command on independence will always provide you with a sense of moral satisfaction.

The second parameter that I wish to suggest should inspire your dialogue is cooperation. The power of cooperation cannot be underestimated as a recipe to a successful administration of justice when it comes to continental courts such as yours. One result which cooperation certainly achieves is political effectiveness. I am aware that when anything political is mentioned in the presence of high judicial officers, the instinctive reaction is to ask: what does he do with separation of powers and independence of the judiciary? However, separation of powers is only a very relative tenet of constitutional democracies in the sense that while realms of the three arms of government should be clearly delineated, collaboration is unavoidable for the very purpose of effective governance. Separation of powers should not be understood as segregation or confrontation of powers. And when it comes to international courts, which perform a very peculiar judicial function and are not clothed with the same features as national judicial institutions, cooperation becomes a key to a purposive administration of justice. This is of course not an invitation to the politicisation of justice but to a strategic design of the politics of justice. I do not preach anything new to judicial minds of your stature by saying that everything has its politics and there are politics of everything.

Thirdly, and finally, I invite you to be inspired by vision. The most important ingredient that Africa requires today is definitely vision. It is no coincidence that the African Union has adopted Agenda 2063, while the ECOWAS adopted Vision 2020 which has now been substituted with Vision 2050; and the East African Community designed Vision 2050. African States understand well that effective governance is all about Vision. You will agree with me that the administration of justice is part of governance and therefore requires vision. If, as it is usually argued, the very critical human rights to development cannot be achieved without justice, then justice needs to be administered with vision if it is to lead to development. Rulings that you make today will determine the fates of future generations of Africans on issues as diverse as health, economics, sociology, politics and even religion. As you must have noticed, the changing nature of legal issues that land in regional courts today demands that solutions designed seek to address potential impact on future developments on the same issue. Only vision can guide courts as yours in responding to such demand given that you deal with legal rules that are international in nature but seek to respond questions that are ultimately for local or national implementation.

Honourable Presidents of our regional Courts and distinguished participants, I understand that in this dialogue space has been provided for capacity development and experience sharing as witness the various interesting topics on the agenda. Considering the topics featuring on the program of the dialogue, I have no doubt that your discussions can very well be inspired by the three parameters that I suggested. Thought provoking they are which I believe every person in this gathering would wish to be part of the discussions and, deliberations drawn from experienced and esteemed panelists and presenters, finely chosen. Undoubtedly, the sessions will be an eye opener on whether you are being good adjudicators and how best you can next attempt to meet the utmost legal and judicial standards expected of you.

Furthermore, the Government of the United Republic of Tanzania, Zanzibar being part of it, has provided for the necessary legal framework including domesticating of several International, Regional and Sub – Regional instruments on promoting and protecting human and peoples’ rights. We are also proud as a country to host several international judicial institutions. The existence of constitutional guarantee of equality cannot be effective unless the citizens and the leadership of a country commit personal and governmental resources to fulfilling those constitutional promises.

Against this background it is my hope that the dialogue will reactivate the energies and visions of human rights justice in Africa. I have no doubt that your engagement will lead to such outcomes which hold unprecedent potential to strengthen justice, human rights and the rule of law in Africa, domestically and at the regional level.

I would like, before ending my remarks, to extend appreciation to those institutions which lend their support whether financial or logistical to ensure that this meeting is held here in Zanzibar. Thank you and congratulations for your commitments to justice and the rule of law.

Once again, I wish you a warm welcome to Zanzibar, which I invite you to visit and enjoy in the diversity of the exotic beaches, famous spice plantations, history and culture that it can offer. On this invitation, I wish you a fruitful and successful dialogue and declare opened the Judicial Dialogue between the ECOWAS Court of Justice, the East African Court of Justice and the African Court on Human and Peoples’ Rights.