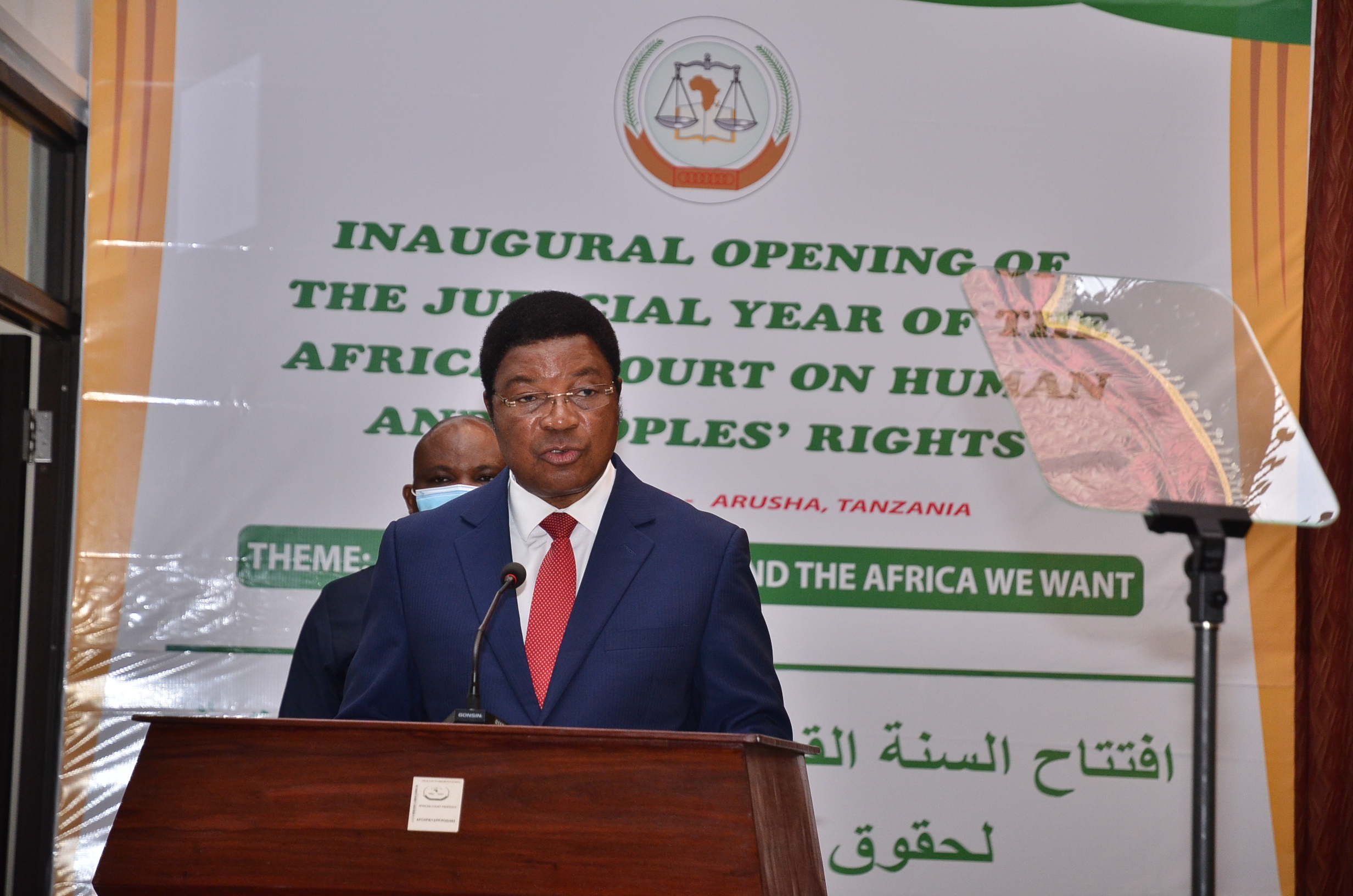 At the outset, I am delighted to bring to you warm greetings from Her Excellency Samia Suluhu Hassan, President of the United Republic of Tanzania, whom the Court had extended an invitation to be part of this important event. But due to other official engagements she was not able to attend.  Let me reiterate Her commitment and Tanzania’s assurance to the Court and the ideals and core values of human rights, good governance, democracy and rule of law and our conviction and support for African institutions.

It is my great honour to represent her and make a statement at this maiden edition of the Opening of the Judicial Year of the African Court on Human and Peoples’ Rights – the apex Court on the African continent. Before I proceed with my remarks, I wish to take this opportunity and privilege to welcome His Excellency Prof. Yemi Osinbajo, Vice President of the Federal Republic of Nigeria, the guest of honour to this forum and to our beautiful country Tanzania. On the same premise, I welcome all those who have travelled across the continent and beyond to attend this solemn ceremony of the African Court, as well as those joining this event virtually.

I know how hard it is at these days to travel from one part of the world to the other due to COVID-19 pandemic. Thus, I wish to commend and thank you for taking your time and bracing the odds to join us during this event in Tanzania.

THE OPENING OF THE JUDICIAL YEAR

Your Excellency Chief Guest, the opening of a Judicial Year, referred to in some jurisdictions as Legal Year or Solemn Hearing is a judicial ritual undertaken by both domestic and international Courts, to mark the official commencement of the year.
It is a significant manifestation and an opportunity to take stock of what has been achieved and address the challenges of the Court.

It is an occasion to ponder and consider unrelenting human rights issues affecting our continent and establish a framework to deal with these issues in the course of the year. It is also an opportunity to bring together different stakeholders involved in shaping human rights and judicial landscape in the continent. I therefore, congratulate the African Court for this initiative.

THE THEME FOR THIS INAUGURAL OPENING OF THE JUDICIAL YEAR

Your Excellency Chief Guest, I have been informed that the theme for this inaugural Opening of the Judicial Year is: “The African Court and the Africa we Want”. The context of this theme is founded on the reality on the ground, as it resonates and focuses on the current political discourse on our continent – driven by Agenda 2063 of the African Union.

Agenda 2063 itself was inspired by the desire for change, the realisation that Africa, although endowed with plenty of natural and human resources, is still tagged as the least developed and poorest continent. It was also a realisation that ‘there was a need to refocus and reprioritise Africa’s agenda from the struggle against apartheid and the attainment of political independence for the continent and encompassing social and economic development, continental and regional integration, democratic governance and peace and security amongst other issues aimed at repositioning Africa at the apex level as the dominant player in the global sphere.

Your Excellency Chief Guest, in order to achieve the objectives set out in Agenda 2063 and the slogan of Africa we Want, we have a significant role to involve all stakeholders in this endeavour.

More importantly, we have an obligation to aspire to entrench an Aspiration 3 which is very crucialand focuses on “An Africa of good governance, democracy, respect for human rights, justice and the rule of law”. The main goals of this aspiration are to entrench democratic values, practices, universal principles for human rights, justice and rule of law; and put in place capable institutions and transformed leadership in place at all levels.

Your Excellency Chief Guest, the judiciary as the paramount and cornerstone in the field of Economic and Social Development must be seen to be at the forefront. In this context, the African Court has a very important role to play in the realisation of Agenda 2063 and the Africa we Want.

PERFORMANCE OF THE COURT

The jurisprudence of the Court over the past 15 years has demonstrated a clear path in the realisation of the Africa we Want. The Court has delivered land mark judgments on a wide range of issues covering civil and political rights, economic social and cultural rights as well as group rights. As a result, it has resolved many disputes at national, sub-regional and continental level, thus encouraging regional integration, and a harmonised African Union law.

These achievements have been orchestrated by accountable and trusted people whom have dedicated themselves to stand for and champion for achievements of human rights in the Continent.

Your Excellency Chief Guest, I know the performance of the Court is not free from scepticism and criticism of some stakeholders, especially Member States of the African Union. This has even led some of the States to withdraw their Declarations under Article 34(6) of the Protocol establishing the Court. This is a clear signal to the Court that in the discharge of its mandate, it must exercise it in good faith, not abusing the trust bestowed upon it and also be mindful to the internal legal processes of member states.

Once again, I wish to express my gratitude on behalf of the Government of the United Republic of Tanzania and its people to the African Union and the Court’s Administration for its right decision to have the Seat of the Court in Arusha, Tanzania. The United Republic of Tanzania, reiterates its commitment to support and continue its obligations as host country in strengthening the existing cooperation with the African Union especially in upholding the core values of human rights and good governance, democracy and rule of law.

As I conclude my remarks, allow me to invite you to take time to savour the beauty of Arusha and Spice Islands of Zanzibar, before you go back home. This will be a good opportunity to see more of the tourist attractions and experience kindness and hospitality of our people. I wish you fruitful deliberations.