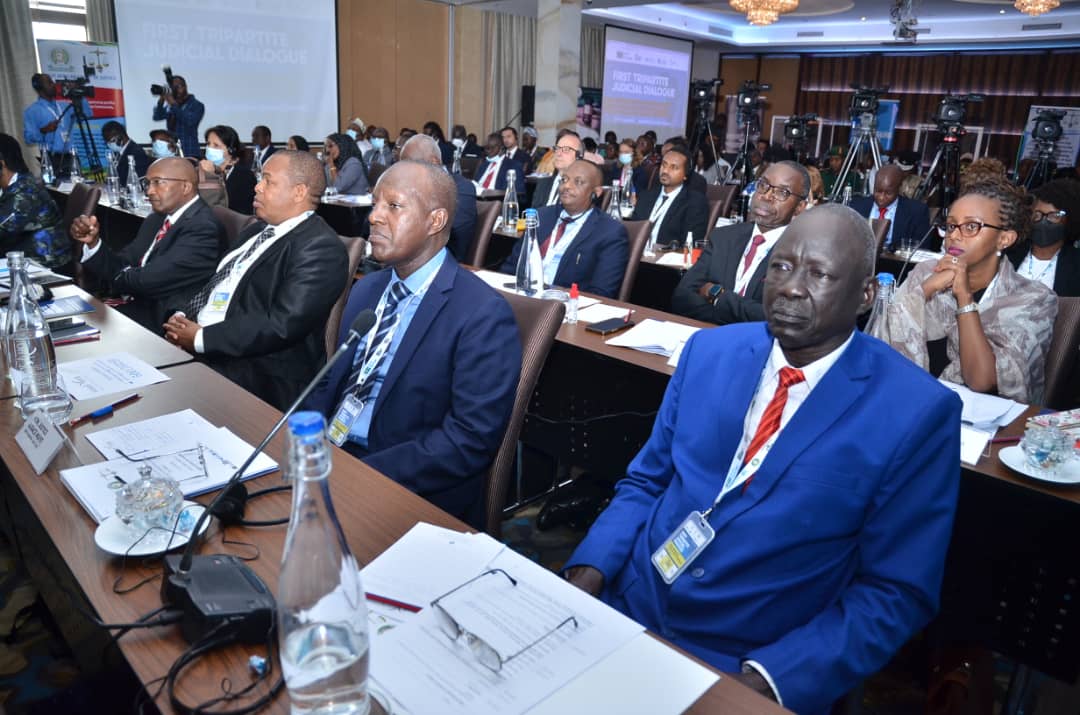 Your Excellence the President,

For instance, in 2020 the EACJ and the African Court signed an MoU to cooperate in areas of common interest, of which to date, joint staff capacity building trainings have been held, knowledge and information shared, and courtesy calls made between the leaderships of both Courts.

Equally the EACJ appreciates the visit of ECOWAS Judges in 2018 and a joint study visit of legal staff and librarians from the three Courts to Sweden, not to mention, the most recent training of librarians in Zimbabwe all facilitated by RWI.

The Court’s major mandate is to ensure adherence to law in the interpretation and application of, and compliance with the EAC Treaty. Article 23 (1)

Its task is to ensure smooth regional integration through administration of justice and respect to fundamental principles of the Community which includes good governance, rule of law and promotion and protection of human and peoples’ rights in accordance with the African Charter on human and Peoples’ Rights.

Initially it comprised of a single chamber. However, in 2006 following its decision in Anyang’ Nyong’o case, the EAC Treaty was amended which substantially changed the Court structure, jurisdiction and access.

In order to bring justice closer to East Africans, the EACJ has established sub-registries in all capitals of the EAC Partner States except for the two recent new members of the Community (RSS & DRC) of which, processes are under way.

Litigants no longer travel to Arusha to file a case, but can file in their respective sub registry offices and only come to Arusha during hearing and determination.

The Court has also introduced annual rotational court sessions at end of each year, to be held in the EAC Partner States. This aims to increase its visibility and to take its services closer to the people. (Bujumbura -2021 & Kampala Uganda-2022)

The arbitral jurisdiction of the Court is not well known by East Africans, and therefore not utilized effectively. For this reason, currently only 6 arbitration matters have been received since the inception of the Court.

On the other hand, national judiciaries of the EAC Partner States complement the interpretive mandate of the EACJ. (Article 33) However, to ensure uniform interpretation and application of the EAC Treaty, the EACJ decisions take precedence over national courts decisions on a similar matter.

Several reasons were given for the delayed extension. Some include: Partner States subscription to the African Charter on Human and Peoples’ Rights, the Jurisdiction be deferred pending the attainment of a political federation and to remain in the domain of national jurisdiction.

With the withdrawal of declarations on the African Court jurisdiction and non-deposit by other EAC Partner States, the reasoning might be demerited.

In addition, the EAC Common Market Protocol provides for series of freedoms on the movement of goods, services, capital, labour and persons across the region as well as rights of establishment and residence. Therefore, the EACJ has to interpret, apply and ensure compliance with all Community laws.

The Guest of Honour,

Distinguished Guests, With these few remarks, allow me to wish you all fruitful presentations and discussions that will enhance our skills and knowledge in addressing issues related to fundamental rights and freedoms in the region and Africa continent at large.

THANK YOU FOR YOUR ATTENTION