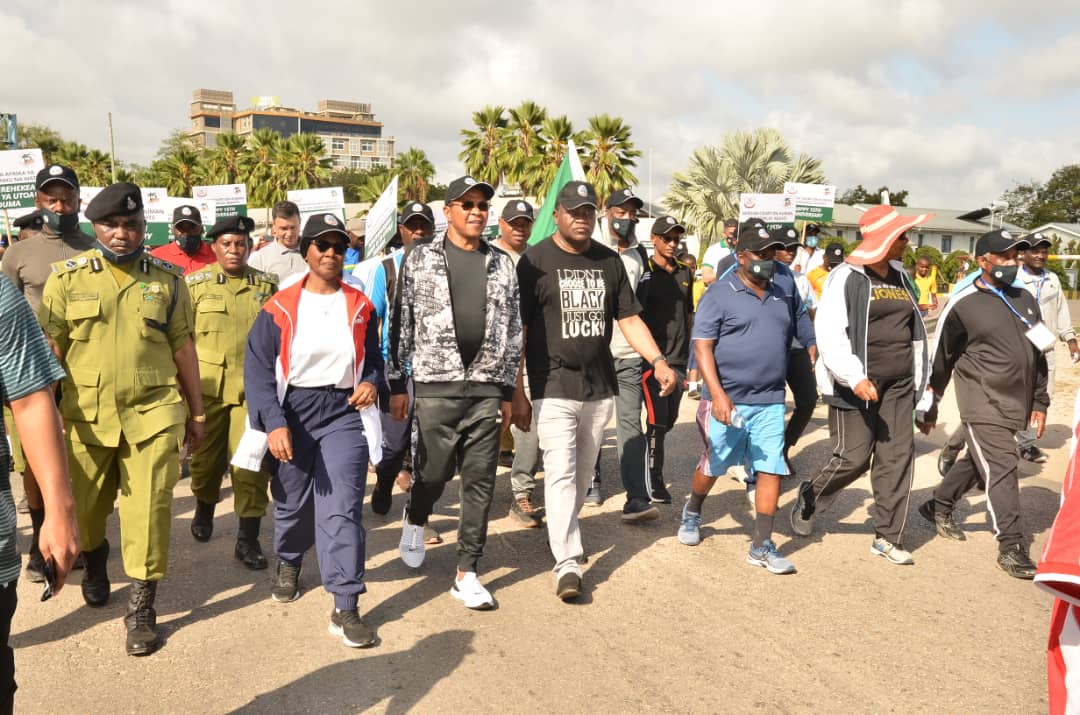 Arusha, 03 November 2021: The Former President of the United Republic of Tanzania H.E Jakaya Kikwete has congratulated the African Court on Human and Peoples’ Rights upon the commemoration of its 15th anniversary.

He was speaking as Chief Guest for the five-kilometre walk to mark the Court’s 15th anniversary that stretched from Kidondoni Leaders’ Club to Oysterbay Police Officers’ Mess in Dar-es-Salaam, Tanzania.

He said this event reminded him of the time when the Court was established and Tanzania offered to host it.

“This event reminds me of the time that African countries decided to establish the African Court on Human and Peoples’ Rights. Immediately after the adoption of the Protocol establishing the Court, the United Republic of Tanzania was among the first nations to signal and later ratify the same. I was Foreign Minister and my President was Benjamin Mkapa. When not only did we sign and ratify but it was then when the President decided that Tanzania was going to host this Court”, he said.

He congratulated the Court for the wonderful work it has done thus far in advancing human and peoples’ rights on the continent, adding that it is a clear testimony of the African Union to create an African solution to African problems.

He also commended the Court for organizing a conference to take stock and assess the impact and implementation of its decisions as part of this Anniversary.

“I commend this step and it helps in identifying areas of strength and challenges the Court is grappling with and provides a forum for collectively consolidating the gains and addressing gaps and challenges.

On this note, H.E Kikwete challenged the Court to take note of the challenges and the gaps identified by the participants so as to properly address them in order to enhance its work.

The Conference on the Implementation and Impact of the Decisions of the African Court was running from 1  – 3 November 2021, at the Julius Nyerere International Conference Center, Dar-es-Salaam, Tanzania.

He asked participants of the forthcoming Judicial Dialogue scheduled for 4 – 5 November 2021, under the theme; building trust in African judiciaries’ to premise their deliberations on the faith the African continent has in them especially towards the realization of Agenda 2063 where peace, justice and stability can only be realized when people’s rights are realized.

He asked the Court to continue raising awareness to the youth of the continent about its activities to ensure a peaceful and prosperous continent where human rights and justice are being upheld and respected.

The President of African Court, Hon Lady-Justice Imani Daud Aboud thanked His Excellency Jakaya Kikwete, for the pivotal role he played in the functioning of the Court, including providing it with the necessary logistical facilities to operate from the city of Arusha.

She also noted that although walking is generally associated with health, fitness, and wellbeing, this particular walk was used for advocacy purposes.

“It may be argued that advocacy walks serve just the same purpose as fitness and wellbeing walks although the aim is to express or regenerate commitment rather than the body. This explains why walks are, as we all know, associated with leadership”, she said

The mandate of the Court is to complement and reinforce the functions of the African Commission, which is a quasi-judicial body charged with monitoring the implementation of the Charter.

AFRICAN COURT ON HUMAN AND PEOPLES’ RIGHTS TO DELIVER 14 JUDGMENTS ON THURSDAY, 2 DECEMBER 2021