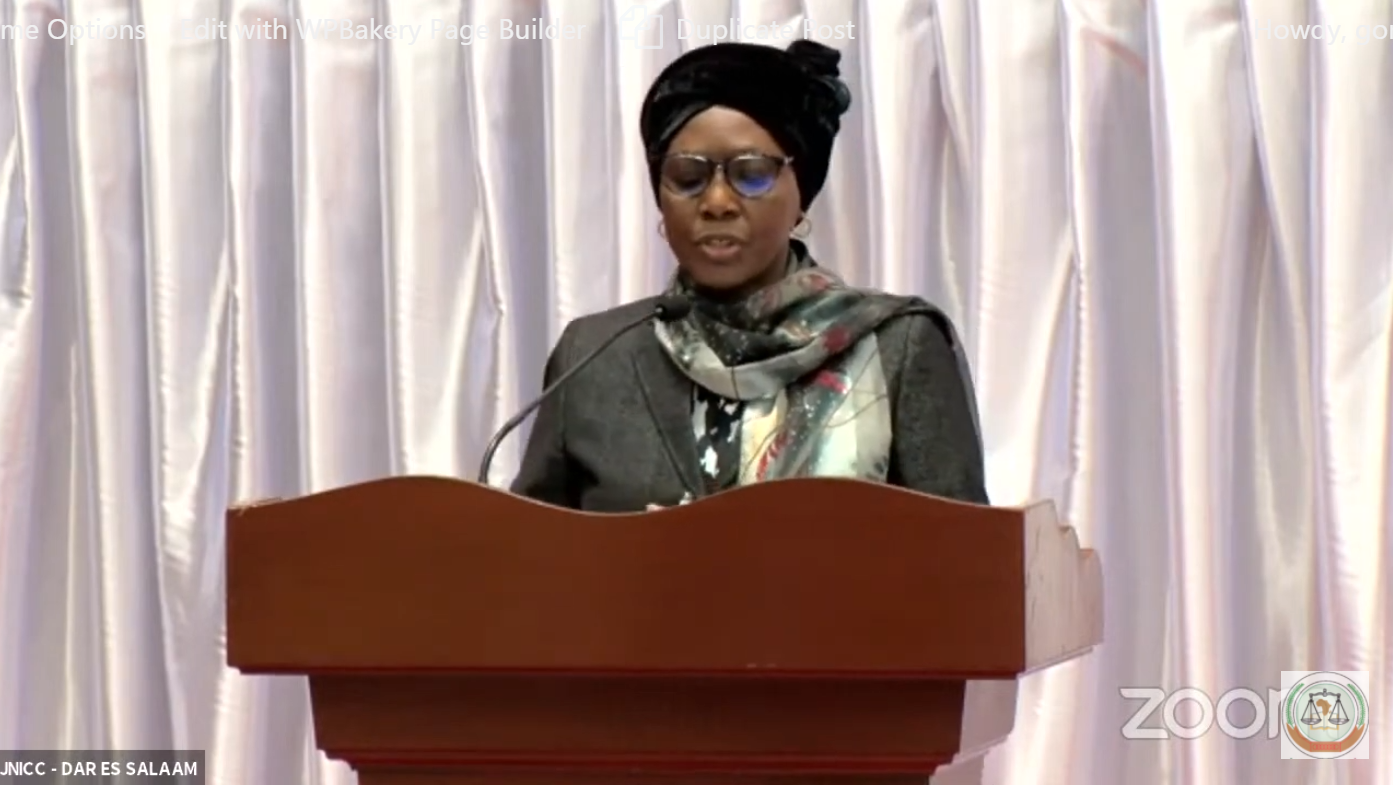 I welcome you all to Dar es Salaam, the city of peace and now, for a couple of weeks, the capital city of African human rights justice. Allow me, as a matter of tradition, to extend the Court’s gratitude to His Excellency the President of Zanzibar who has designated the Honourable Minister Haroun Ali Suleiman to grace this event with this presence. Your Excellency, please accept and convey the Court’s appreciation to His Excellency the President for having hosted our 4-week session in November 2019, and agreeing again to host the very important forthcoming retreat between the Court and the Permanent Representative Committee of the African Union slatted to take place in early December.

Excellencies, Distinguished colleagues and participants, it is largely agreed that the main rationale for any justice system is the enforceability of the outcome of the dispute that the parties bring before a competent body for adjudication. There lies the justification for the maxim of ubi jus, ibi remedium, which postulate that where there is a right, there should be a remedy to vindicate that right should a breach occur. This major principle of justice is betrayed if the remedies exercised remain without effect on the legal situation brought for resolution. It follows that, regardless of the legal system, the country, or the parties to the dispute, it is the very legitimacy of the adjudicatory body that comes under threat every time a judicial decision is disregarded. It is in recognition of this imperative of the rule of law that the African Union lawmakers conferred on the decisions of the African Court both the binding character and enforceable nature through Article 30 of the Protocol establishing the Court.

The fact that only 7 per cent of the decisions so far delivered by the African Court have been enforced is therefore alarming as it betrays the aim pursued by Member States of the African Union while establishing the Court. It is so because States envisaged the Court as an essential link in the achievement of the continental integration project contemplated by the founding fathers of the African Union.

Your Excellencies, Ladies and Gentlemen, Distinguished Guests, I welcome you all to the International Conference on the Implementation and Impact of the African Court Decisions. The conference that begins today should have taken place two years ago but was postponed for various reasons that I do not think it is important to recall here. What I do think is important however is that the successive postponements have caused the conference to be held this year and this month, at a very opportune moment in the history of the African Court. Indeed, this conference could not have been held at a better time than now, when the African Court is facing the most important challenges of its existence.

Besides, you will agree with me that by the nature of the norms it applies, the very mandate of an international court is indeed to enforce and harmonise the interpretation and application of international law in the national systems of the Member States that have consented to the particular regime involved. In this regard, it is worth noting that 54 of the 55 Member States of the African Union have ratified the African Charter on Human and Peoples’ Rights and virtually all the constitutions of these Member States recognise the Charter as having a fundamental normative value in constitutional democracies and the rule of law in the region. As a consequence of this universal recognition of the Charter, the authority and legitimacy of the African Court should therefore be almost unanimously recognised by States. However, there is very little national response to the decisions of the African Court, which is another cause for concern.

The key issues arising from this disconnect trend between the African Court and national are manifold. For example, when the African Court rules on the death penalty, which is recognised as a cross-cutting issue in the region, should governments not be expected to undertake the necessary reforms to prevent litigation in which the Court would ultimately give judgment against the State concerned? Similarly, when a national court adjudicates on the issue of freedom of expression on which the African Court has already made a pronouncement, should the municipal judge not be guided by the source of interpretation provided by the African Court given that the African Charter is already part of national law?

Your Excellencies, ladies and gentlemen, without dwelling into the substantive questions to be discussed during this conference, I would simply like to remind us of the main issues that have motivated the holding of this conference. The issue of enforcement and the impact of international courts’ decisions has been widely debated. In reflecting on it again, we must seek therefore to shape innovative recommendations. We are bound to formulate solutions that fit the African context and which cannot ignore the socio-political realities of the continent, even if the law must remain our compass.

Given the quality and diversity of the resource persons invited to this meeting, I have no doubt that our deliberations will lead to conclusions that hold the potential to change the status quo. I would like to assure you that, as part of its new approach to cooperation with States, the African Court is committed to carefully examining the conclusions and recommendations of this conference on the occasion of the exchanges it will be holding with States in a few weeks to discuss the mandate and operation of the Court within the African Union framework.

On these notes of commitment, I wish us fruitful deliberations and thank you for your kind attention.