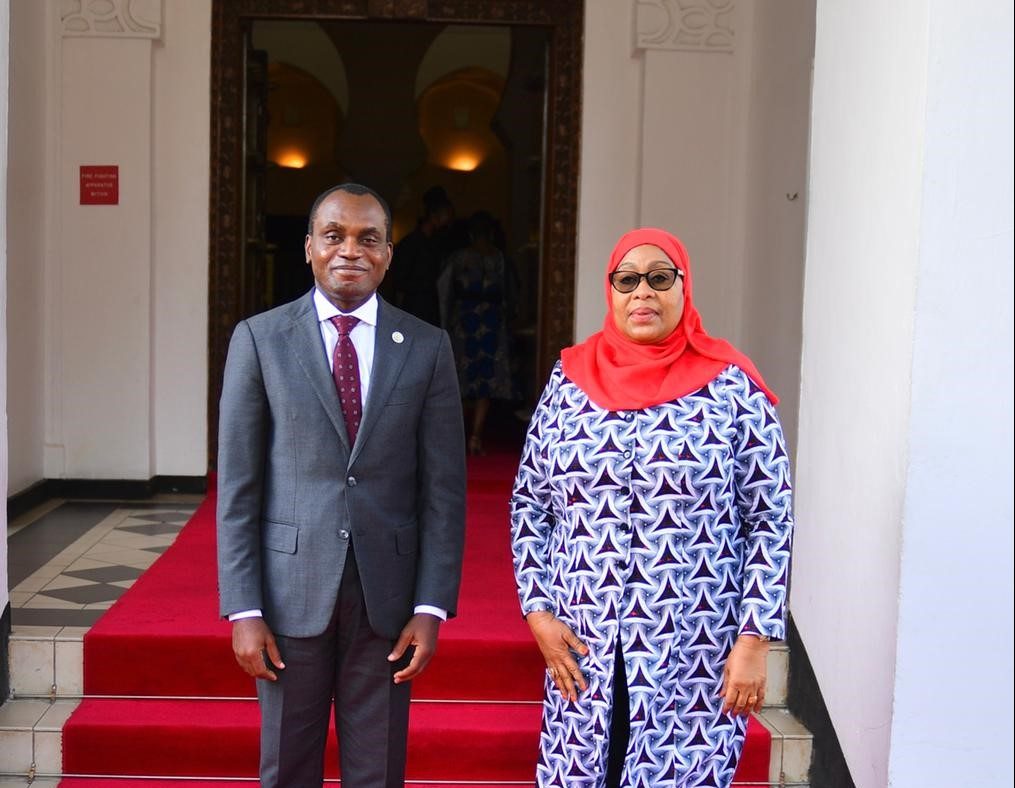 Arusha, 28 May 2021:  The President of the African Court on Human and Peoples’ Rights Hon Justice Sylvain Oré yesterday paid a courtesy call on the President of the United Republic of Tanzania H.E Samia Suluhu Hassan at the State House in Dar es Salaam where the two discussed issues of mutual interest.

During the discussions, the President of Tanzania, assured her government’s full support for the continental court, adding that her country was fully committed to the objectives of the Pan Africanism and in particular, its judicial body which is hosted by Tanzania.

‘’My government fully stands with the Court and its work,’’ assured President Samia Hassan.
H.E President Samia Suluhu appreciated the Court’s efforts at strengthening human and people’s rights across Africa.

She also assured that her government would put initial money for the construction of the permanent premises of the Court at the located site on the outskirts of Arusha town.

The Court is currently housed in a temporary location in the Tanzania National Parks (TANAPA) complex in Burka area.

Regarding Tanzania’s withdrawal of its Article 34(6) Declaration, which allows citizens direct access to the Court, the President said that her government would look into the matter, but her government’s current position remains unchanged.

Tanzania notified the African Union of the withdrawal of its Declaration on 21 November 2019. The said withdrawal took effect on 20 November 2020.

Earlier, President Oré thanked the government of the United Republic of Tanzania for hosting the Court and facilities availed to it.

‘’We thank the government of Tanzania for hosting the Court and facilities extended to it,’’ President Oré stated, however, adding that the construction of the permanent premises would ease the acute office accommodation problems facing it.

He implored Tanzania, as a host country and a champion of human rights, to reconsider its position on the withdrawal of its Declaration.

He also updated the President that the Court, which marks 15 years since its operationalisation, has been adopting measures to ensure the effective discharge of its mandate.

He gave the example of the New Rules of Court which were adopted in September 2020.

‘’The new Rules of Court seek to enhance the effectiveness of the Court by, among other things, improving the management of cases as well as ensuring better implementation of the decisions of the Court,’’ according to President Oré.

The African Court President also bade farewell to the Tanzania President at the end of his tour of duty.

Other members of the delegation of the Court included Judges Tujilane-Rose Chizumila and Imani Daud Aboud and Registry staff.

2. In addition to the ratification of the Protocol, States have to make a Declaration required under Article 34(6) of the Protocol to allow citizens to bring cases directly before the Court. Without such Declaration, the Court would have no jurisdiction over cases brought before it.

3. The Protocol was adopted on 9 June 1998 in Burkina Faso and came into force on 25 January 2004.The Court officially started its operations in November 2006 initially in Addis Ababa and a year later moved to its permanent Seat in Arusha, Tanzania.

ADVISORY OPINION OF THE AFRICAN COURT ON HUMAN AND PEOPLES ‘RIGHTS DELIVERED ON JULY 16, 2021

LATEST: SUMMARY OF JUDGMENTS DELIVERED AT THE CLOSE OF 61ST ORDRINARY SESSION