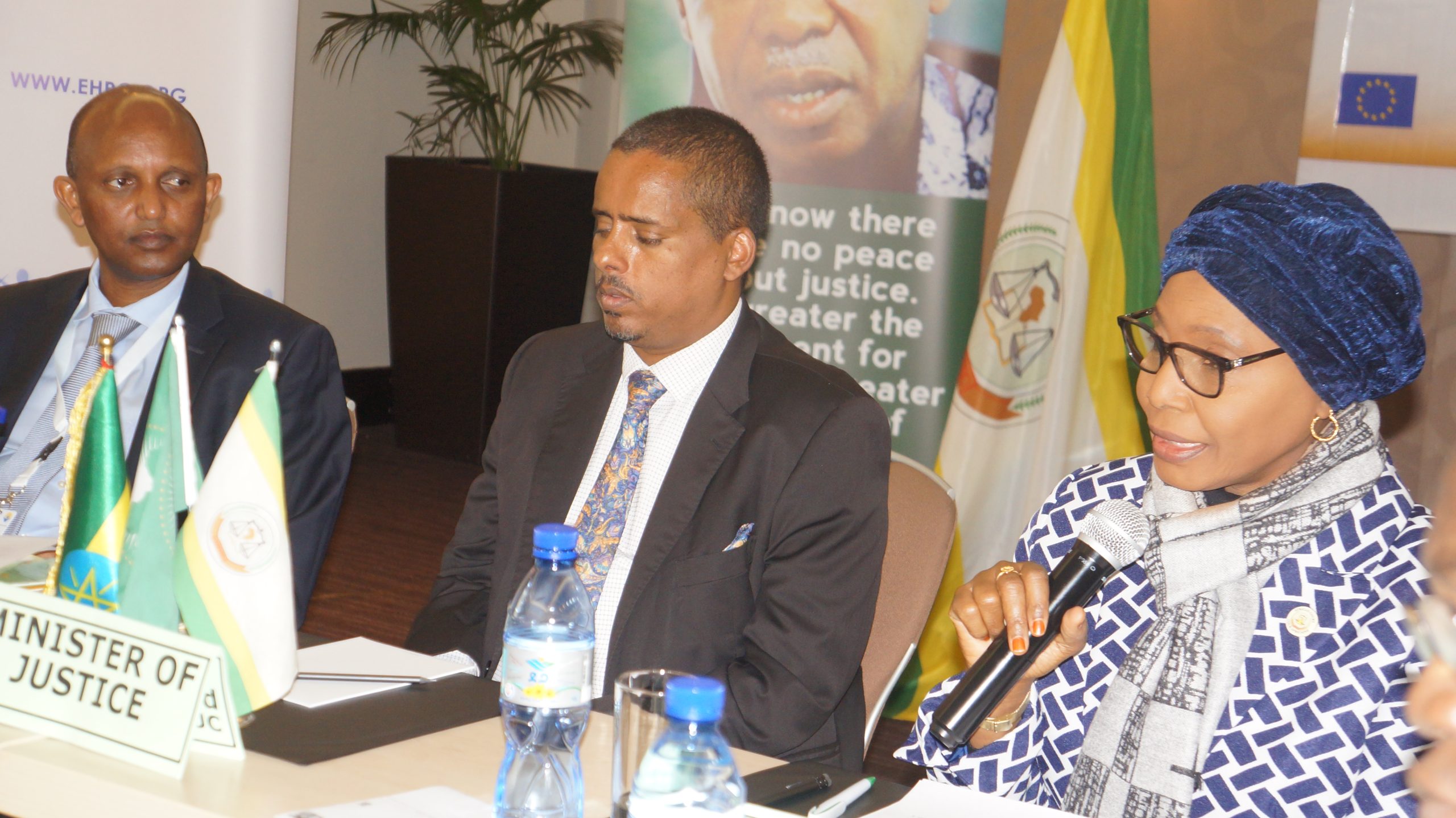 SENSITIZATION SEMINAR TO ETHIOPIA: OPENING STATEMENT OF HER EXCELLENCY IMANI D. ABOUD, PRESIDENT OF THE AFRICAN COURT ON HUMAN AND PEOPLES’ RIGHTS

THEME: AFRICAN COURT ON HUMAN AND PEOPLES’S RIGHTS: YOUR PARTNER IN STRENGTHENING THE PROTECTION OF HUMAN RIGHTS IN AFRICA

Your Excellency, Minister of Justice, first and foremost, on behalf of the African Court, let me express my profound and heartfelt appreciation to the Government of Ethiopia for the warm welcome extended to us in this beautiful country of yours and ours, home of the African Union, the capital city of Pan-Africanism and land of ancient African civilization.

Whenever I happen to be here, and I believe, it is also true for other fellow Africans, I feel that I am in my own home country and this is not something that I take for granted. In his autobiography, Long Walk to Freedom, the late freedom fighter, anti-Apartheid Hero and ex-President of South Africa, Nelson Mandela, wrote: “Ethiopia has always held a special place in my imagination. I felt I would be visiting my genesis, unearthing the roots of what made me an African.” I believe that this was not unique to Mandela rather; it is a perfect expression of the shared feeling of hundreds of millions of African citizens.

On this important occasion, I would therefore like to thank the Government and people of Ethiopia for their continuous support of the Pan-African cause in general and particularly, for accepting our request to undertake this Sensitization Visit, organize this Seminar and for all the facilities we have been provided to ensure the success of our mission.

Furthermore, I am also very grateful to you personally, Your Excellency, for accepting to be with us to grace this opening ceremony. All gestures and acts clearly demonstrate the commitment of your Government and other authorities in this country to the promotion and protection of human rights as well as to the work of African institutions.

I should also thank You, Honourable Dr Daniel Bekele, Chief Commissioner of the Ethiopian Human Rights Commission and your topnotch team for the incredible effort and support. Certainly, this mission would not be successful without your commitment. We are inspired by the professionalism of your team and staff.

Last but not least, I wish to thank institutions and organizations represented here, members of the Diplomatic and consular corps for their positive response to our invitation to participate in this seminar. We are very pleased to have you here.

Your Excellency, as you know the African Court is the judicial arm of the African Union with a mandate to enhance the protection of human and peoples’ rights in Africa. It was established by virtue of Article 1 of the Protocol to the African Charter on Human and Peoples’ Rights. The Protocol was adopted in June 1998, and came into force in January 2004. The Court became in July 2006, and had its seat here in Addis, until August 2007 when it moved to its permanent seat in Arusha, the United Republic of Tanzania. Ethiopia was therefore the first home of the Court.

Your Excellency, I will not go into all the specific reasons why this sensitization seminar is necessary, but for one; the seminar is a credible effort in breathing life into the cooperation that must exist as between the African Court and the Government of Ethiopia and human rights stakeholders in the country.

It may interest Your Excellency to know that, a delegation of the African Court led by myself the President of the Court requested for this visit to engage with your Government to consider the possibility of ratifying the Protocol establishing the Court and depositing the Declaration. Our aim is also to raise awareness about the existence and work of the Court.

Your Excellency, there are many reasons why your great country must not be left out of the African Court. To begin with, Ethiopia is among the founding Members of the OAU, and the host of the AU Headquarters.

We are also alive to the fact that Your Government has been doing a tremendous work to create a stable, prosperous and democratic country. We are confident that despite the inevitable challenges you face, you will achieve what you set forth in your roadmap.

We believe that the recent reforms that your Government has undertaken in all sectors is a testament to the fact that Ethiopia is on the right direction.

I would like to note that it is this realization that made me and the entire African Court believe that it is now a right time to undertake this Sensitization visit at this time and urge your Government to be part of the Court.

Your Excellency, as you understand, this is in keeping with your Government’s wide-ranging reform and strong desire to create a peaceful and prosperous nation.

The success of the Court as a human rights protection mechanism requires wider ratification of the Protocol by Member States, as well as their acceptance of the competence of the court by making the Declaration.

It is my hope, therefore, that armed with the valuable discussions and deliberations from this seminar both the African Court and the Government of Ethiopia will strengthen their cooperation and jointly act upon and implement the outcome of the seminar.

Excellency and distinguished participants, allow me once again to take a moment to applaud our colleagues who have invested time and resources to organize this seminar. To them I say thank you for your effort. I also thank everyone who took time to participate in this event despite your very busy schedule.

I wish us all, not only a productive but also a result-oriented seminar that will lead to the fruitful deliberation.

Thank you for your kind attention.