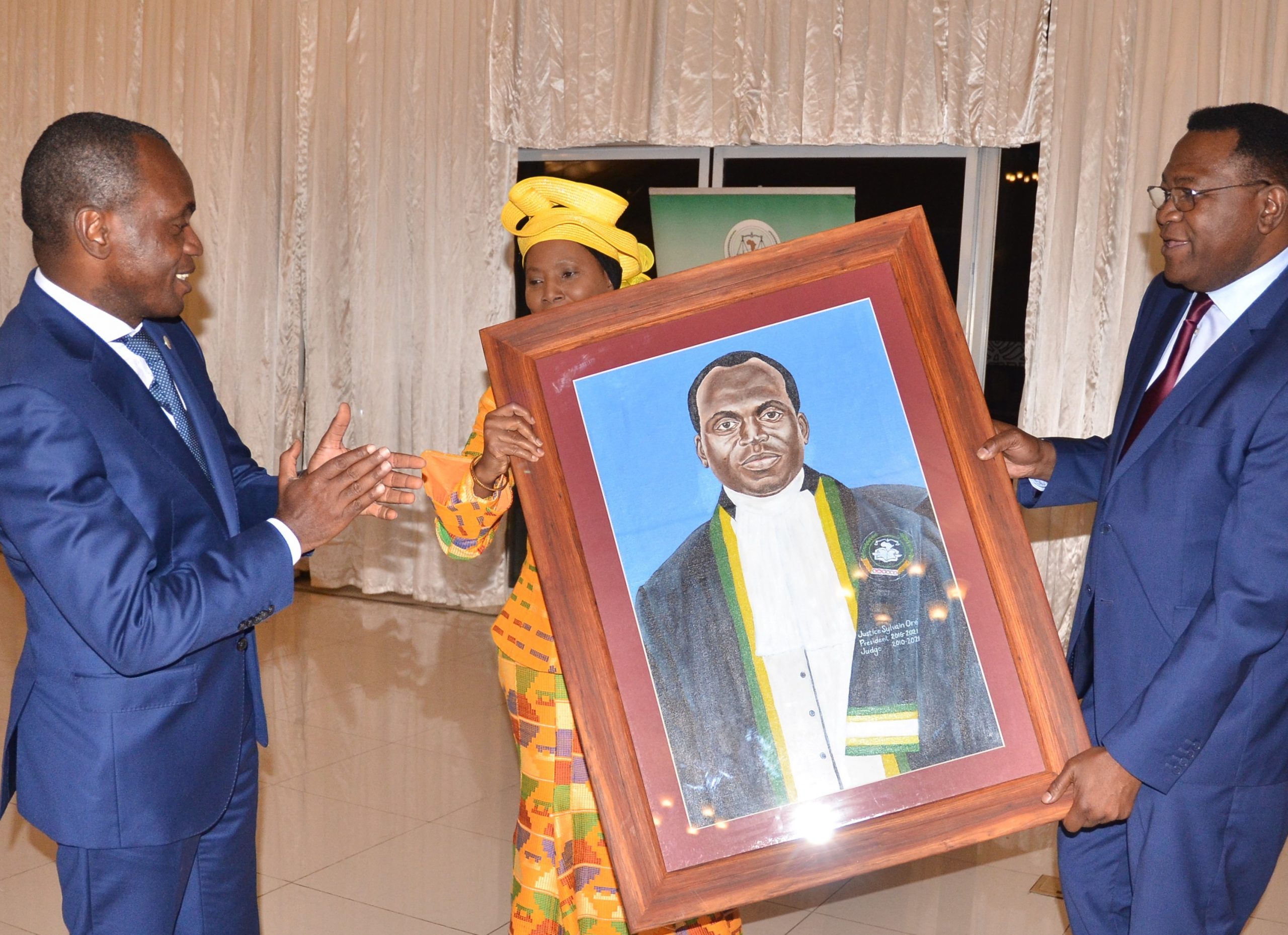 I welcome you all at what has now become one of the most traditional family events of the Court with words that I borrow from two well-known leaders; the first is from Martin Luther Kind Jr and I quote

A genuine leader is not a searcher for consensus but a molder of consensus.”

the second quote is from Ralph Waldo Emerson and I quote

Do not follow where the path may lead. Go instead where there is no path and leave a trail.”

Distinguished colleagues and dear African Court’s family, ceremonies of swearing in of Judges or hand over between Bureaux, and more particularly, between President of the Court, would be incomplete without the very traditional farewell to the outgoing leadership. I am therefore delighted that, despite health related and schedule challenges, we are able to conform to our truly African ritual of paying tribute and bidding farewell to those who have made a significant contribution to our society, to our family, to our institutions. And today, we have gathered here to do so in respect of a leader who has served the African Court for four years at the helm of the Institution as its President. However, as you will shortly notice, my remarks will depict the traits of both the head of an institution and a family leader. These are indeed the two most distinctive features of my brother and colleague, Honourable Justice Sylvain Oré.

As a lawyer and a Judge of an important institution as the African Court, it was obviously expected from Justice Oré to display some distinctive professional characters. From that standpoint, you will all agree with me that during his presidency, the Court has made many of its most tremendous achievements. While may be an intricate exercise to account for the achievements of such a hardworking leader as Justice Oré, I find it relevant to mention some of the most praise worthy milestones attained during his time in office. It is indeed under President’s Oré leadership that the Court has attained its highest productivity obviously due to the sustained efforts that his Bureau have put into negotiating significant increases in both the duration of sessions, and financial resources allocated by the African Union. Human resources capacity of the Court has also grown with a particular attention given to the legal personnel who implement the core activities of the institution in addition to improved working conditions of Judges. Among many other critical gains, Justice Oré has devoted an outstanding commitment to seeing the Court face some of its greatest challenges which have manifested during both his two terms in a complex cooperation with states. In the face of the wave of states withdrawals from the Court, it is only fair to praise President Oré and his Bureau for earning the institution more ratifications and more declarations due to the incessant visibility work deployed over the past four years.

Distinguished guests, and African Court family, visibility of the Court was indeed at the heart of Justice Oré’s presidency as witnessed by such achievements as a wider human rights media networking, a larger pool of well-trained counsel registered with the Court, an innovative law reporting system, as well as an emerging and state of the art digitization of case work processes. Having personally joined the Court during his second term in office, I have also seen sustained efforts by President Oré to improve operational effectiveness of the Court’s registry. Not only greater staffing efforts but also courageous administrative decisions made under his leadership have resulted in the registry implementing a result-oriented approach to supporting the work of Judges as the labour power house of the institution.

The President Oré that we know is also the one with a humane figure; characterized by an obsession to inclusiveness as well as a constant openness to entertaining difference in opinions. He was also very much prone to reconciling divergent viewpoints whether in legal opinion making or merely administrative management. Such qualities cannot be taken for granted, which is why we are here to celebrate his legacy to the African Court.

Honourable colleagues and dear Court’s family, the leadership of the Court come in pairs; and I also wish to extend a few words of tribute to the other Judge of the Court who led the institution together with President’s Oré during the past four years and I name Honourable Justice Ben Kioko. Vice President Justice Kioko’s contribution to the development of the Court speaks for itself from his role as the African Court’s ambassador to putting his personal networking skills at the service of the institution. His great deal of experience working with the African Union and other networks in the continent has indeed helped the Court navigate the murky waters of political sensitivity at times when the institution needed it the most. We are glad to still have him around as Judge Dean and extend great appreciation to him for continuing to lend his unique support to the development of the Court.

Distinguished colleagues, and staff of the Court, it is my view that at this juncture we are seeing off a transitional generation of the African Court’s leadership. I say so because, President Oré and his Bureau succeeded a generation of leaders known to be the founding fathers of the Court. As we bid farewell to President Oré, myself and my Vice President do consider ourselves as the generation of maturity and accomplishment of the institution. The Court celebrates this year its 15th anniversary of operation and we believe it has just elected the right leaders to polish off the foundations left by the previous generations of leaders.

Honourable Justice Oré, Honourable President Oré, Honourable friend and brother, as you take leave of the African Court, please be assured that the house is in good hands. We will capitalise on your achievements to take the institution from teenage into adulthood. In this light, I would like to ask you to continue being the relentless ambassador of the Court at all times and in all places.

And to all the Judges and staff of the Court, I would like to say “You are not here merely to make a living. You are here in order to enable Africa and Africans to live more amply, with greater vision, with a finer spirit of hope and achievement. You are here to enrich Africa, and you impoverish yourself if you forget the errand.” Dear President Oré, we thank you again for your leadership, merci beaucoup, muit obrigado, shukrani, asante sana.