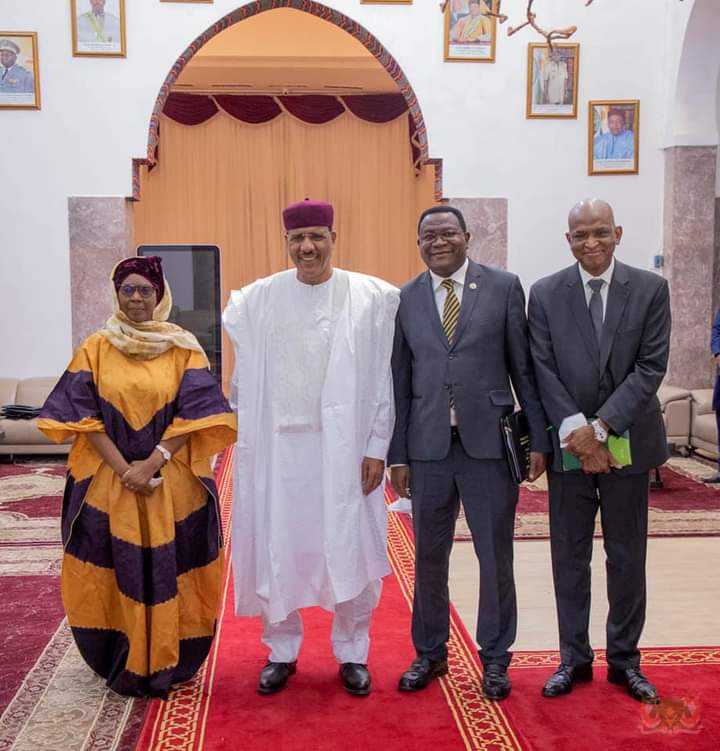 Arusha, 29 October 2021: The President of the Republic of Niger, His Excellency Mohamed Bazoum, has reiterated his country’s strong commitment to the protection of human rights and to the mandate of the African Court on Human and Peoples’ Rights as the only continental judicial body of the African Union (AU).

Niger, he stated, is a constitutional democracy that embraces the rule of law and fundamental freedoms as prime governance standards.

These commitments were recalled as His Excellency President Bazoum welcomed to the State House in Niamey a delegation of the African Court headed by its President, Hon Lady-Justice Imani Daud Aboud on 26 October 2021.

Highlighting the purpose of the Court’s visit, Lady-Justice Aboud stated that “after its long-standing commitment made by ratifying the Court’s Protocol, it is high time that Niger filed the Declaration recognising the jurisdiction of the Court to entertain cases brought by individuals and NGOs”.

In echoing this request, the President of Niger pledged to consider all processes towards the filing of the Declaration in a bid to affirm Niger’s human rights credentials and foster its participation in regional integration.

The African Court’s delegation undertook the visit to Niger as part of its sensitization programme to the Member States of the AU aimed at increasing awareness of the Court among various stakeholders, mainly governments.

Engagements with these various stakeholders involved their respective roles in raising awareness domestically on the work of the Court and how best Niger can play its role in the attainment of the African Court’s mandate in line with relevant norms of the AU pertaining to human rights, democracy and the rule of law.

Various officials and stakeholders met during the visit assured the Court’s delegation of their eagerness to extend effective cooperation to the continental judicial institution in achieving its mandate to reinforce the protection of rights and freedoms primarily guaranteed to citizens by domestic mechanisms, which States establish in fulfilment of their obligations under African and international instruments.

1.  Republic of Niger had ratified the Protocol establishing the African Court on 17 May 2004.

3. The Court is composed of 11 Judges, nationals of Member States of the African Union elected in their individual capacity.