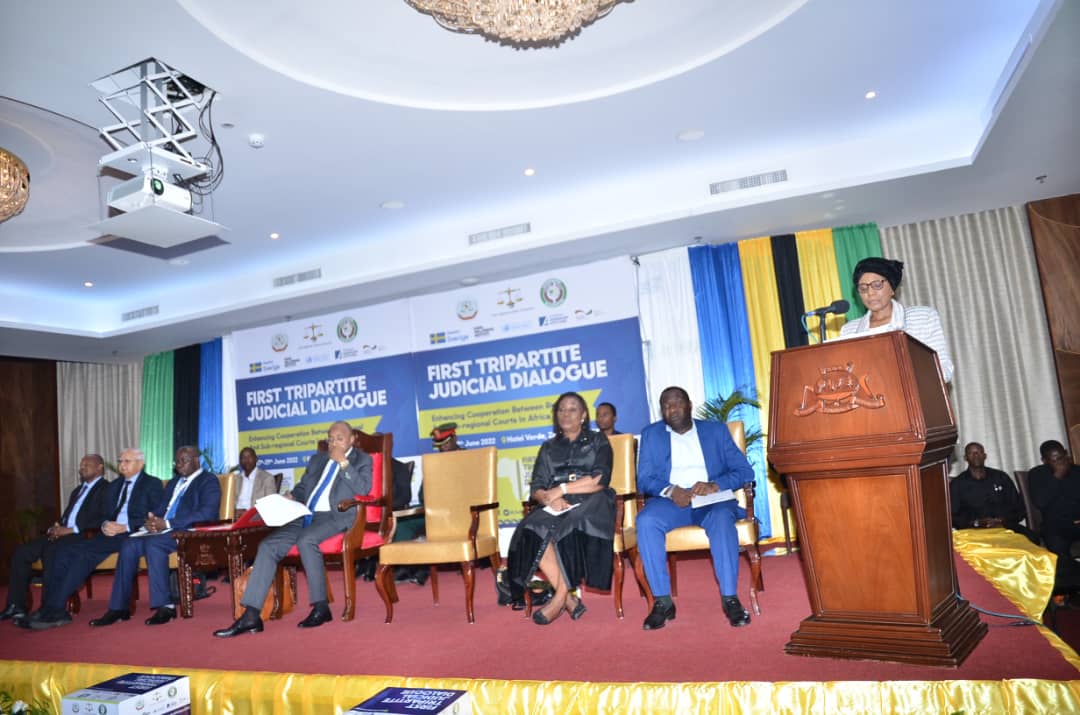 Your Excellency Dr. Husseini Ali Mwinyi, President of the Revolutionary Government of Zanzibar

Your Excellency, the Minister of Justice and Good Governance and the Revolutionary Government of Zanzibar

Your Excellency the Chief Justice designate of Zanzibar

Honourable Judges of the African Court, East African and ECOWAS Courts of Justice

Registrars of the three Courts

Officers of the three Courts

Executives and Senior Officers of GIZ and the Raoul Wallenberg Institute

Judicial dialogue has become a critical tool to achieve justice in an increasingly globalised world. The purpose and gains of the judicial dialogue are now established, and undeniable. Yet, a dual question remains topical and current: how to undertake judicial dialogue and what to dialogue about? There is no doubt that judicial dialogue has for long been part of the practice of domestic courts through case-law borrowing. Judicial dialogue has also been shaped at the regional level in Africa and all of us are now very much involved in and part of the decade old African Judicial Dialogue which is established as a tradition that we perform every two years from both vertical and horizontal perspectives. The very resourceful gathering of November last year in Dar es salaam offered us an opportunity to celebrate a decade of continental judicial dialogue in Africa. The Dar dialogue brought about some daring, provocative and challenging debates about how technology has invaded public discourse and therefore demands adjustment to judicial dialogue and administration of justice. We also had an opportunity to restate some of the commitments made ten years ago in Arusha; commitments to main tenets of constitutional democracy such as the rule of law, judicial independence, separation of powers, and protection of fundamental rights.

Recent developments in Africa’s socio-political and legal landscape unequivocally demand that African leaders reaffirm their commitment to justice. Whether to terrorism, armed conflicts, famine, political violence, under development, or poverty, justice continue to stand as the agreed solution. In fact, and as Agenda 2063 clearly acknowledges, the aim of government is human development mainly through social justice. It can therefore not be denied that judges and courts have a role to play in achieving development justice whether by enforcing political, socio-economic or development rights. The way to do this best is through legal and judicial knowledge sharing. In other words, to best administer justice on legal issues that are insistently becoming global yet with domestic application, we judges and courts need to engage in consistent trading of legal and judicial solutions. As regional courts, our role is to harmonise and unify the domestic application of the African Charter on Human and Peoples’ Rights. This is an imperative to best resolve issue that are international or foreign in nature but which are increasingly landing in African countries and communities through globalisation. I name terrorism and its socio-political and economic consequences, but I also name pandemics, technology, social media; and further more structural questions such as free and fair elections, governance and states cooperation with international human rights courts and tribunals.

There is statutory basis for today’s meeting in Article 60 and 61 of the African Charter. I make reference to the Charter in a framework of judicial dialogue for at least two reasons. Firstly, the Charter can rightly be said to be the main normative basis for the material jurisdiction of our three Courts either as a standalone instrument or as a source of law recognised by Member States and that we have all applied in adjudicating cases; secondly, Articles 60 and 61 of the Charter provide express invitation to judicial dialogue in that they call for recourse to not only foreign and international case-law but also to general principles of law recognised by African nations. The point I am trying to make here is that after making pledges to judicial dialogue from an international perspective as was done in the Kampala Declaration involving the European and Inter-American Courts, today’s gathering provides us with a unique opportunity to reinforce African regional dialogue in its horizontal approach. To achieve this, we need to use the existing framework, which can take both from the experience of the continental judicial dialogue but also by implementing parts of the memorandum of understanding that we have signed at the bilateral level.

I want to thank various stakeholders for giving us the occasion to do so by supporting the organisation of the present event. I begin my thanking the authorities of the United Republic of Tanzania for continuing to extend support to both the African Court and the East African Court of Justice; and for lending organisational support to welcoming the ECOWAS Court of Justice and all other guests attending this event. I also want to extend appreciation to the Revolutionary Government of Zanzibar for its unconditional support to a number of events organised by the African Court over the past years, and for becoming somehow a headquarter of regional human rights justice in Africa.

Appreciations are also in order for the logistical support offered by the German Cooperation institution GIZ, and the Raoul Wallenberg Institute, which reiterates their commitment to the rule of law globally. I congratulate the Registry of the African Court and indeed all other focal persons within the East African Court of Justice, and ECOWAS Court of Justice for the efforts vested in organising this activity. I would like to reiterate that while judicial dialogue should remain guided by the need to innovate and inaugurate in trading legal solutions and judicial practices, international judges and courts such as ourselves should appreciate the importance of states cooperation as the other critical ingredient of an effective justice. In light of the quality of the participants and relevance of the various topics, I am convinced that our engagement with lead to effective outcomes that reinforce judicial dialogue, judicial independence, and efficient administration of justice. On these notes, I wish us fruitful deliberations and look very much forward to the forthcoming discussions.

Thank you for your kind attention.