NEWS
00:34
Home Media Speeches OPENING REMARKS OF HE IMANI D ABOUD, PRESIDENT OF THE AFRICAN COURT AT THE RETREAT BETWEEN THE COURT AND THE PERMANENT REPRESENTATIVE COMMITTEE OF THE AFRICAN UNION  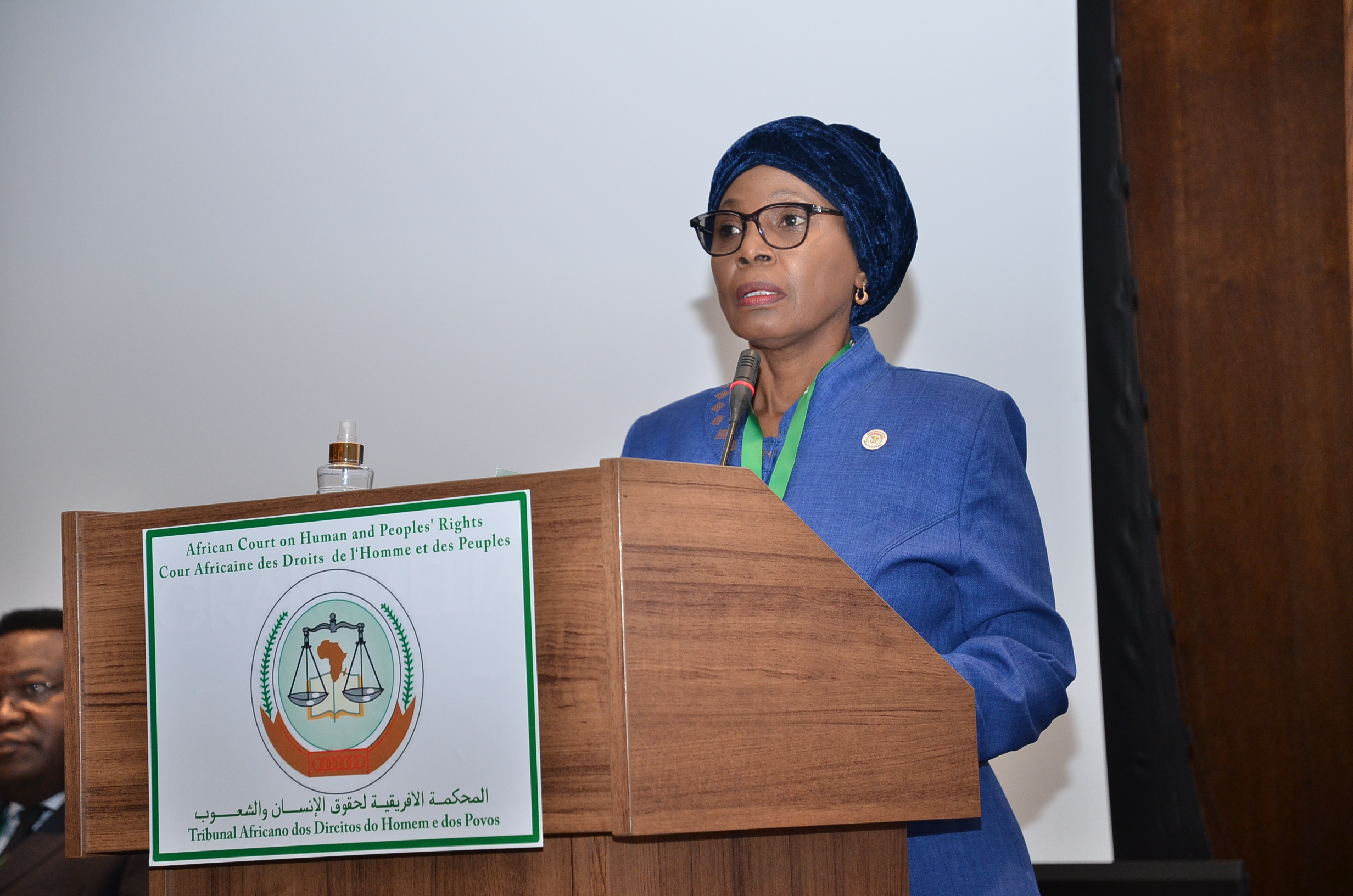 OPENING REMARKS OF HE IMANI D ABOUD, PRESIDENT OF THE AFRICAN COURT AT THE RETREAT BETWEEN THE COURT AND THE PERMANENT REPRESENTATIVE COMMITTEE OF THE AFRICAN UNION 

The African Court is honoured. We are very pleased to host, here at the seat of the Court, the active arm of the policy organs of our umbrella institution, that is the African Union. The retreat that begins today is unprecedented in the history of the Court. Beyond previous engagements with the PRC, this retreat crystalizes our common long entertained desire to set up a formal framework for constant and continued engagement on matters that are critical to the functioning of the African Union and its organs. You will therefore understand why I find it preliminary to extend my appreciation and that of the entire Court to all of you for making this retreat possible.

Allow me to first pay a deserved tribute to previous Bureau of the PRC for paving the way to the initial talks that led to agree as a matter of principle that the retreat is imperative and urgent. It is also logical to express our gratitude to the current Bureau of the PRC whose Chairperson had already owned the idea of this retreat at the time when his country was a member of the previous Bureau. Tribute should ultimately go to all PRC members and I want to lay a particular emphasis on all the Ambassadors who stretched their busy schedules to find time and meet with the Court delegation during our visits to the headquarters of the Union in Addis Ababa.

The importance of justice and human rights in realising the African Union that Member States want is also the justification for establishing many other institutions not only judicial but also technical. In reality, the very African Union Commission and its various departments exist to pursue this same goal. The decision of the Union to embark on overall reforms that have been ongoing for the past three years is mainly based on the need to achieve greater effectiveness in the operations of the African Union.

The African Court was created by Member States as the main judicial institution to pursue human rights justice in the continent. The Court is therefore inextricably interlinked to achieving Agenda 2063. As you have unanimously expressed when you met the Court’s delegation during our tour, there is a common understanding that the Court has made tremendous achievements since its inception. Having said that, we have also agreed that challenges facing the Court in the recent years are not only arising from the overall institutional challenges of the African Union but also from some difficulties that are peculiar to the Court, which ultimately speak to its very existence and future operation.

It seems that some key pointers are relevant to comprehending such context. Firstly, it may be understandable that while governance is about continuity, the stakeholders who directly designed the African Court between 1994 and 1998 are no longer actively involved in the operation of the African Union. Secondly, and as many of you have raised during our talks, the knowledge of the African Court and its achievements among Member States is not necessarily what would have befitted an institution of such importance. Finally, the other inescapable truth is that the socio-political context has also changed in the past 15 years since the Court started its operation. One would therefore agree that if the Court is to continue discharging its initial mandate in an effective manner, it needs to evolve, adapt, and adjust. The significant contestations raised by four of the only ten States that recognise the jurisdiction of the Court show that perhaps this is time for the whole African Union to reflect on rethinking the human rights justice project embodied by the Court.

Against the backdrop that States created the Court with a specific aim and design, they should be able again, after 15 years, to reflect on whether the Court has achieved the initial purpose and where they want the Court to be in the next 15 years. Granted this, as I earlier demonstrated, States created the Court but they did so for the welfare of Africans. Doing so comes with the duty that the Court should continue to operate as an African public service of justice.

If this commitment is to be upheld, here are some leading principles which should inform an effective exercise of stock taking and looking forward as to how the African Court should operate. And let me recall that the following are well grounded not only in the Constitutive Act of the African Union, in the African Charter and also in Agenda 2063.

Firstly, any prospective reflection on the protection of human rights can only be progressive and never regressive. In a continent which harshly endured slavery, colonisation and apartheid, human and peoples’ rights should remain the pillars of regional integration and human development. Of course, as well enshrined in Article 27(2) of the African Charter, general interest should prevail but never to the extent of eroding the very purpose of human rights. Secondly, reforming should necessarily preserve institutional development. In the context of the African Court, a better African Court can only mean a Court that retains its uncompromised independence. Independence of an institution like the African Court would of course include that the Court is given the necessary means to operate including financial means, due recognition by the African Union and Member States, and legitimacy that is built among others through enforcement and respect for decisions of the Court. Needless to restate that, as many of us agree, an effective African Court means a Court with Judges that are given the means to discharge their duty without fear or favour. Finally, we should be committed to diplomacy and as you have noticed in the past 6 months, the Court has demonstrated its commitment to judicial diplomacy. This retreat is the best illustration of our common commitment to a constant and formal diplomacy that operates beyond the minimal context of reporting frameworks of the AU Summits.

All the stakeholders of the African Court are African citizens, whether Ministers, Ambassadors, Judges, Staff of the Court, Applicants and their Counsel, or civil society organisations, we are all Africans. Therefore, we all owe Africa a duty to make our institutions successful and useful to Africans. As a matter of facts, any one of us might possibly have to seek justice before the African Court in the future as has already occurred in several regional courts in the continent. The African Court is therefore our Court. I have no doubt that we are all fully committed to a more effective African Court, and I would like to ensure you of the unfettered commitment of the Bureau, as well as all Judges and Staff of the Court to continue engaging with Member States as the main stakeholders of the institution. It is my hope that the preliminary discussions held during our various meetings in Addis Ababa and in some capitals will lead to informed and contextualised deliberations. Permit me to thank you again for making time to take part in this meeting. I wish us fruitful discussions and thank you for your kind attention