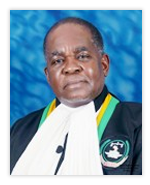 Judge Duncan Tambala, a national of Malawi, was elected judge of the African Court on Human and Peoples’ Rights in June 2010 for a six year term.

At the time of his election, Justice Tambala had just retired from the bench of the Malawi Supreme Court of Appeal on which he served from 1998 to 2009. He remains a Justice of Appeal for the COMESA Court.

Judge Tambala is a holder of Bachelor of Laws degree obtained in Malawi in 1972 and a Master of Laws Degree from Bristol University, United Kingdom in 1985.

From 1995 to 2005, he was the chairman of the Inspectorate of Prisons in Malawi, and a member of the Special Commission to Review the Constitution of Malawi in 1998. Currently, he is Chairman of the Police Service Commission.

Justice Tambala is the author of a Bench Book for Lay Magistrates published in 1995.