NEWS
16:58
Home Media Speeches 61ST ORDINARY SESSION OF THE AFRICAN COURT ON HUMAN AND PEOPLES’ RIGHTS: OPENING REMARKS BY HON. JUSTICE SYLVAIN ORÉ, PRESIDENT OF THE COURT ON THE SWEARING-IN OF TWO JUDGES 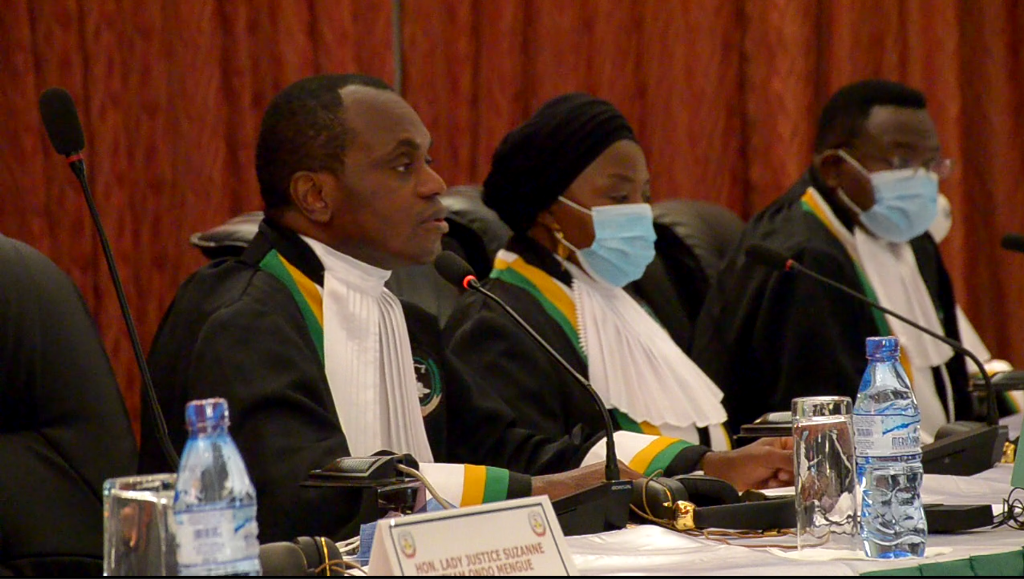 61ST ORDINARY SESSION OF THE AFRICAN COURT ON HUMAN AND PEOPLES’ RIGHTS: OPENING REMARKS BY HON. JUSTICE SYLVAIN ORÉ, PRESIDENT OF THE COURT ON THE SWEARING-IN OF TWO JUDGES

It gives me great pleasure and honour to welcome you to this public sitting of the Court dedicated to the swearing in of two Judges of the Court elected by the Executive Council of the African Union during its 31st Ordinary Session held earlier this year, in February. This being a formal gathering to welcome our newly elected colleagues, I wish however to seize the same opportunity to address you all, from within and outside the Court, as I also take leave and step down both as a Judge and President of the Court. My address to you is therefore inspired by three main words: gratitude, achievement, and hope.

Let me begin by abiding by our tradition and also fulfilling the initial purpose of this gathering. In this respect, I would like to extend a very warm and cordial welcome to the Court to you, dear colleagues, Honorable Justice Dumisa Ntsebeza from South Africa, and Honorable Justice Modibo Sacko from Mali. With the wealth of experience that you all possess, I am convinced that you will bring new perspectives and insights that will help propel the Court to continue achieving its mandate. Beyond this, you are in my view refreshing comers to an African Court that is in significant need of state, being one from South Africa, a state that has yet to recognize the jurisdiction of the Court; and from Mali a state that has been cooperating fully with the Court. We hope that you represent the symbol of a new departure regarding state cooperation with the Court. Having said that, I return to the three words of gratitude, achievement and hope, which I earlier mentioned were to shape my remarks as I pay farewell to our Court and the African human rights justice community.

Speaking of gratitude, and now speaking also on behalf of the Honourable Vice President of the Court as a Bureau, I believe our first recognition should go the highly devoted staff of the Court who supported our commitment at the helm of the institution for the past four years. We have indeed enjoyed the consistently improving support of very well skilled, tremendously devoted, and highly competent staff headed by the Registrar, Dr. Robert Eno, and I wish to request that we all command them for duly serving the continent under our leaderships. Team work and family spirit are two main take-aways from my experience with the Court staff, and the same applies to my collaboration with my colleague and now friend, the Honourable Vice President, Justice Ben Kioko. The confidence that you might have all seen over these past four and a half of presidency were definitely impacted by Justice Kioko’s strong sense of service, effectiveness, diplomacy and friendship. My special appreciation also goes to all Judges who served under our leadership for their support, including at times of significant misunderstandings and disagreements including on judicial matters and administration of justice. They have always kept the good of the Court above all other personal considerations and allowed only the rule of law to prevail. Finally, allow me to express appreciation to the government of the Republic of Côte d’Ivoire for trusting my ability to make an addition to the Court as they nominated me twice candidate for the position as a Judge thus giving me the opportunity to also exercise leadership of the institution. As I will reiterate later on, state cooperation shall remain key to an effective achievement of the Court’s mandate.

Honourable colleagues, Distinguished guests, permit me to now speak to achievement as being the second section of my remarks. When I took over the presidency of the Court in September 2016, as a duo with my dear colleague Honourable Justice Ben Kioko, we set ourselves the main objectives of taking the Court to the next level in terms of cooperation with the African Union and member states; but also with other stakeholders. In the interest of time, allow me to state a few of our achievements as a Bureau, which include strengthening cooperation with states by obtaining ratifications and recognition of jurisdiction; but also implementation of decisions of the Court whether in a post ruling or preventive approach; we have also consolidated cooperation with the Permanent Representative Committee, and the Executive Council as well as the Commission of the African Union as witnessed by the consistent validation of our activity reports and words of appreciation that followed our interactions within the framework of cooperation with the policy organs of the Union; under our leadership, visibility of the Court has also significantly increased as illustrated by the sustainable holding of the Judicial Dialogue, the launching of first activities of international such as the Forum with the sisters European and Inter-American Courts of Human Rights; but also with regional sister institutions including the Banjul Commission, as well as the ECOWAS and East African Courts of Justice; over the past years, we have taken fair trial one level further by consolidating legal aid through the selection and training of lawyers of repute from across the continent and setting the framework for a legal aid funds scheme that renders access to justice more affordable to those Africans who seek relief for the breach of their fundamental rights; under our leadership, New Rules of Court were introduced with critical improvement on administration of justice; under our leadership, resources of the Court both financial, material and human were strengthened; and technology was improved.

Now, one thing that I would have liked to say is that states adherence to the Court also significantly improved, but unfortunately the truth is that the Court has faced considerable challenge in that area especially in the past two years. In this regard, I wish to be honest by expressing concern while at the same time be positive by expressing full hope. And this is indeed the third and last section of my remarks. I can only express hope in the face of the issues that the Court has recently faced with states especially those that have adhered to its compulsory jurisdiction. Having just returned from a courtesy visit to the authorities of our esteemed host country, the United Republic of Tanzania, I can only express hope. As the visit was ongoing, I largely witnessed the high hopes placed by the public and the media in some of the announcements made by the Tanzanian authorities regarding their cooperation with the Court. The only promise by Her Excellency the President of the Republic to reconsider the decision to withdraw from the compulsory jurisdiction of the Court is already an illustration that states that have withdrawn their declarations have never denied the Court any legitimacy whatsoever or reclaimed cooperation with the Court. And indeed almost all the states that have withdrawn so far have consistently continued to participate in proceedings of the Court including for cases filed after the withdrawal, which as per the Court’s ruling still fell within its jurisdiction. Actually, we have noted that many of the same states have taken proactive or preventive approach by expediting matters or taking action concerning cases that were then or are still pending before the Court. Having said this, I must critically admit that there is an urgent need for tremendous actions into the Court’s approach to cooperation with states. Let me put in blankly, I am a strong proponent of judicial diplomacy, which we have all seen is not new in our practice and is also grounded in statute as provided for not only in the Protocol establishing the Court but also in our Rules and interactions with the policy organs of the Union and with individual states under bilateral engagements. States are and will remain our main vis-à-vis in achieving the aims of justice as well stated in the preamble to our founding instrument, I named the Ouagadougou Protocol.

Esteemed colleagues, distinguished guests, ladies and gentlemen, in concluding on hope, I cannot take leave without referring us to our deeply African traditions which rightly place women at the heart of hope as they give birth; but also at the heart of cooperation as they bring families together. And as I pay farewell to you, I wish to proudly announce another of our achievement during the past years, which is to expressly provide in our Rules of Procedure that while electing the Bureau of the Court, parity should apply. In implementing these details rules for the first time in the Court’s history, it is my pride and pleasure to announce that the Registry has recorded only female candidates to run for the position of President of the Court during the elections that will immediately follow the present gathering. I must say that while this is coming as a result of implementing the law, it is also only a matter of institutional and social justice given that the Court has been living in an era of a female majority bench with 6 women out of 11 judges sitting on the Court in the past three years. With women at the helm of this Court, I am fully confident that our legacy shall be affirmed, and that the Court shall send another unique signal to all its stakeholders in African and beyond.

Tafheen ul Quran – Surah 93 ad-Duhaa, Ayat 4-5
‘’ 93:4 indeed what is to come will be better for you than what has gone
by
93:5 verify your lord will soon give you so Amply that you will be well-pleased”

Romans 5.5 … “And hope does not put us to shame, because God’s love has been poured out int our hearts through the Holy Spirit, who has been given to us …..”

With these words of gratitude, achievement, and hope, I thank you again for your support during these years, and for your kind attention.